Cabin Snowglobe with a twist!
by Sphoorti 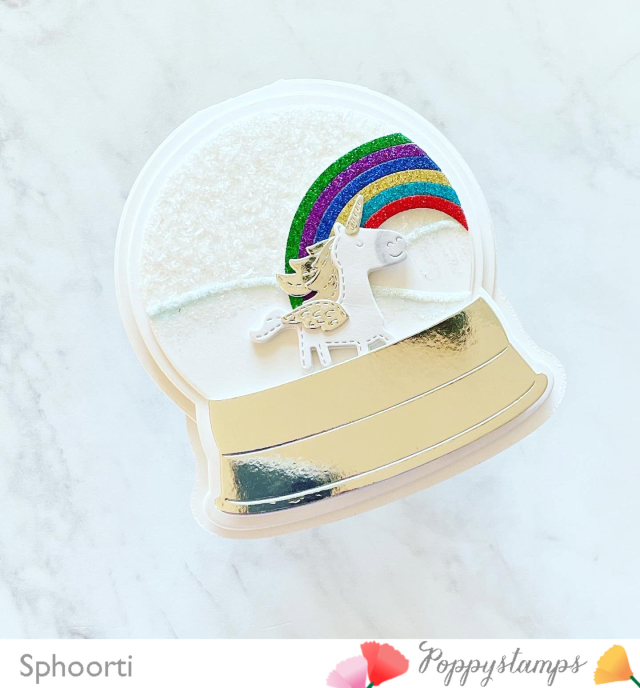 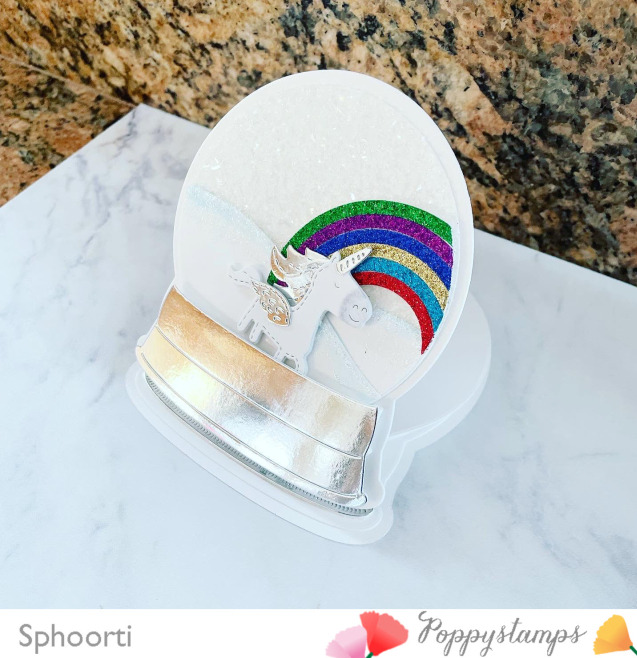 So, it turns out that I'm not quite done with the winter, the snow, or the Cabin Snowglobe Die Set. When the Whittle Rainbow Unicorn Kit craft die was release in January, I had an idea to use components of it with the Cabin Snowglobe Pop Up Die Set that was released in the 2021 Holiday Release. I was finally able to implement it!

Do you guys remember my post from January: The Glitzy and Pastelly Rainbows? Well, I had a couple of glitzy rainbows left over that I saved, and so step 1 = complete!

Then, I took the Whittle Rainbow Unicorn Kit craft die set and cut out the unicorn and his fabulous wings and hair and horn with silver cardstock, and his body with just plain white cardstock. I colored his nose and mouth area with a gray copic marker. I stacked a bunch of diecuts to give him some dimension and sturdiness. (Somehow I still managed to break his neck - not sure if you can tell from the pictures. Poor guy). 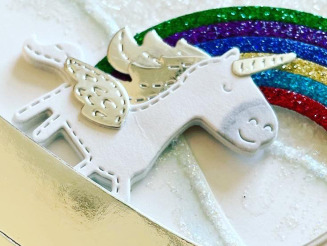 Anyway, after I was done putting him together, I cut out all the components of the Cabin Snowglobe Pop Up Die Set with white and silver cardstock. The globe portion at the top - I cut out from cardstock on which I applied double sided adhesive so that I could sprinkle the Diamond Dust for the sparkly goodness, because what's a unicorn without sparkle? 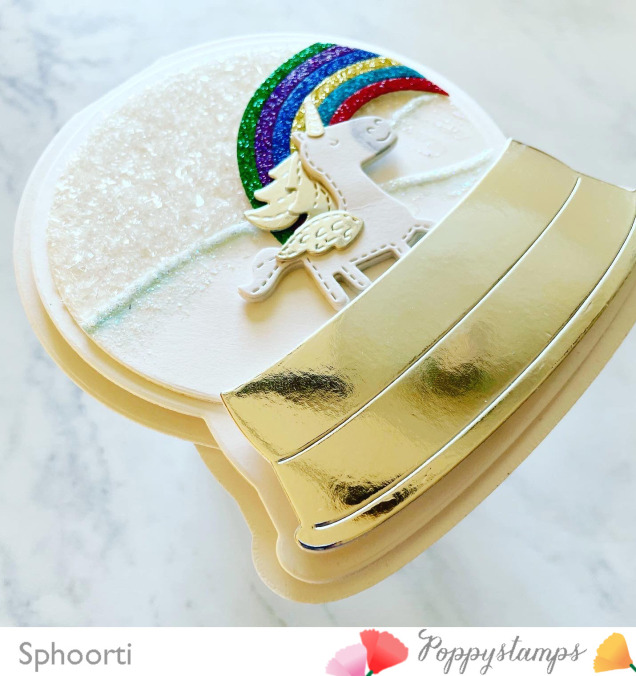 I put the glittery background all the way in the back and then layered the hills in the front, and foam mounted the rainbow. I used some stickles glitter along the hills for some added dimension. And then I put the unicorn dude at the forefront of it all. What do you guys think? 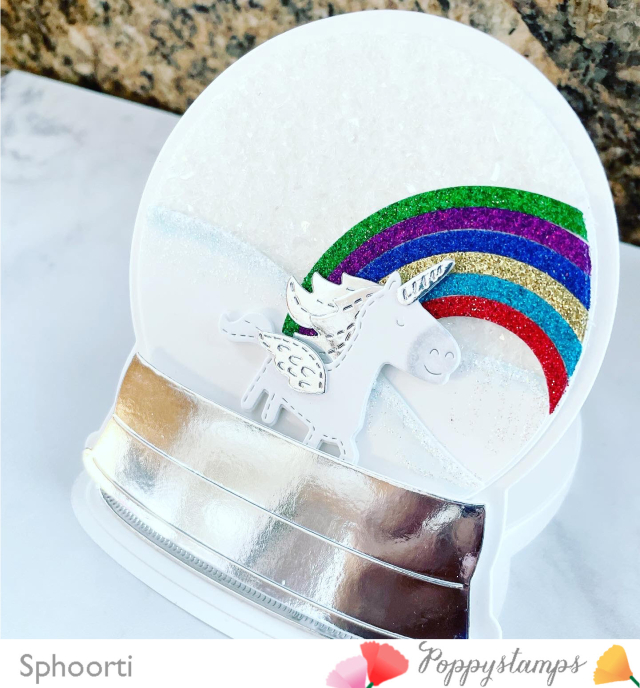 I felt like there was enough going on and did not want to add more. Do let me know how you feel about a card without a sentiment. Hope you still liked it! 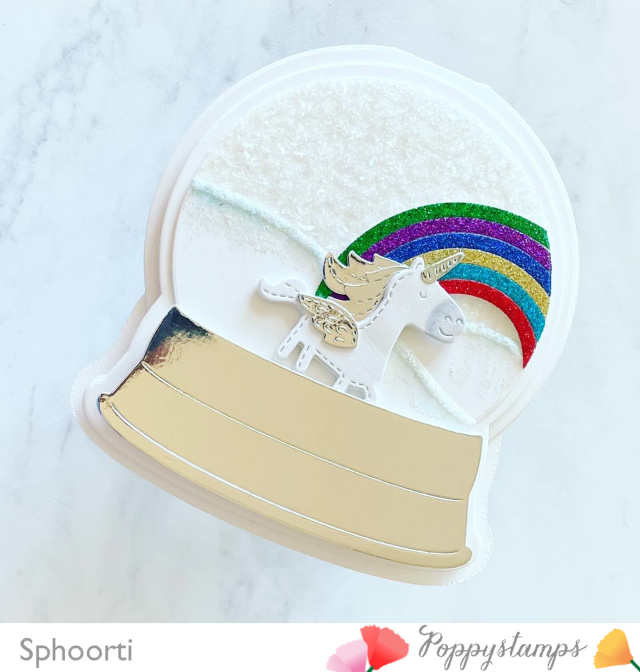 Thoughts? Questions? Epiphanies? Please do let us know! We love to hear from you! Thank you for sticking with me through the end of the post!

P.S. Special shoutout to Patricia Howarth and Nancy Yoder and all others who leave sweet comments on our posts. The application doesn't allow us to reply individually / notify you with our responses, so wanted to give you a shoutout here. Please know that your comments are not unnoticed, and they make my day. Thank you so much for the love and encouragement.

Sincerely, and with lots of love, 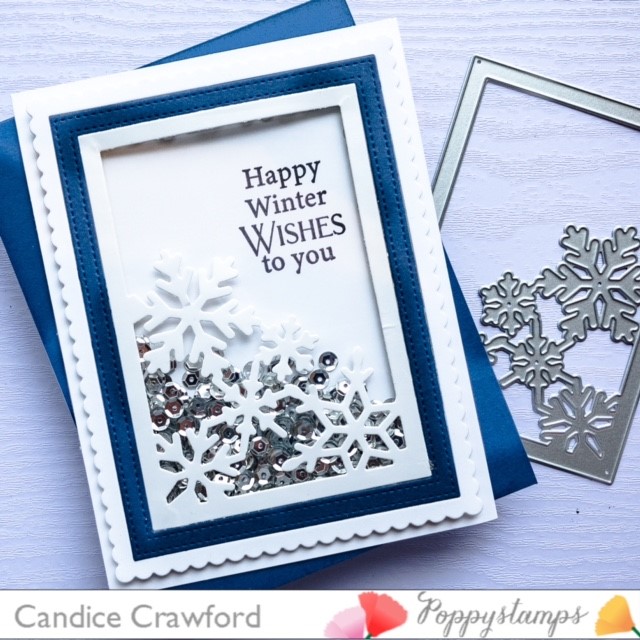 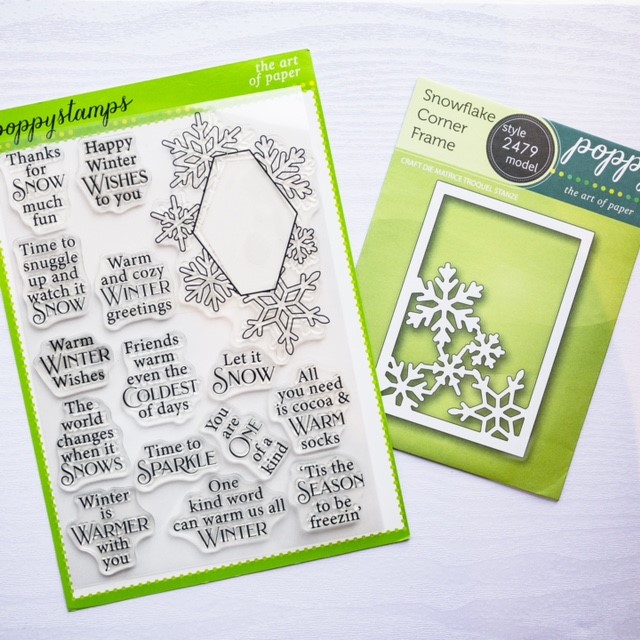 The snowflake corner frame die is perfect for making shaker cards. I simpley die cut the frame from white cardstock. Then I took my new favorite die set, the scalloped stich frames die and cut it from blue and white cardstock. I layered the blue frame side the white scalloped piece then layered the snowflake frame insde the blue frame. The alternating colors are so striking. 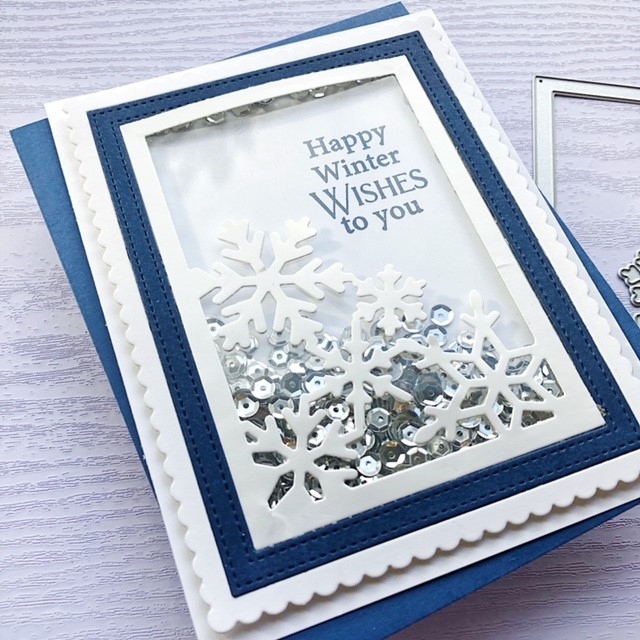 Once all of the layeres were in order I adhered them togehter with scotch tape. I cute a simple rectangle from acetate using the double stich rectangles frames die and adhered the acetate to the layered frame with liquid adhesive. 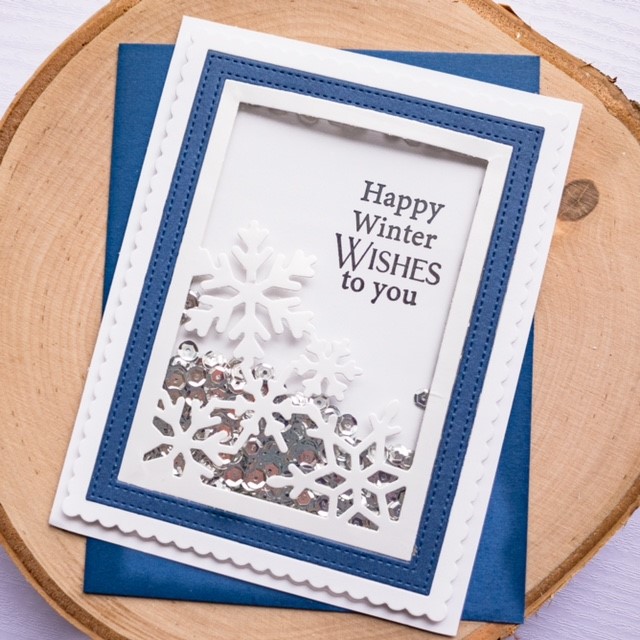 Next, with 3M foam tape I lined the frame. On the white card base, I stamped the sentiment Happy Winter Wishes to you in versafine onyx black ink and set it a side to dry. Lastly I added some silver sequins to the center of the card and then adhered my layered frame with acetate window to the stamped white cardbase. 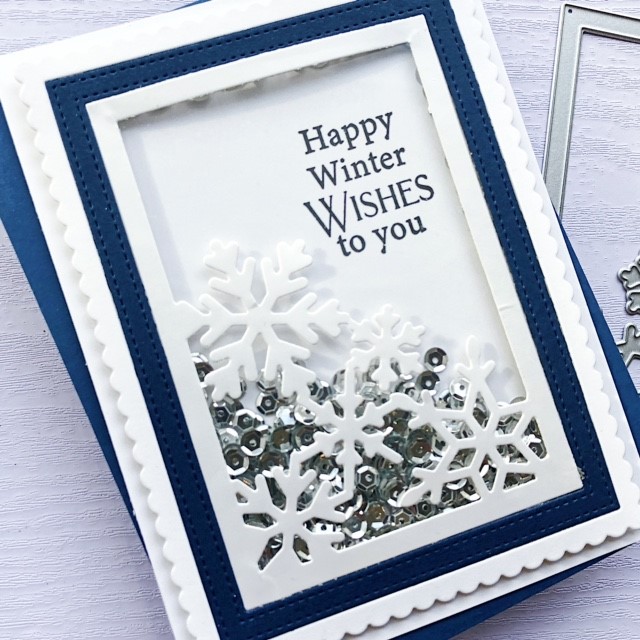 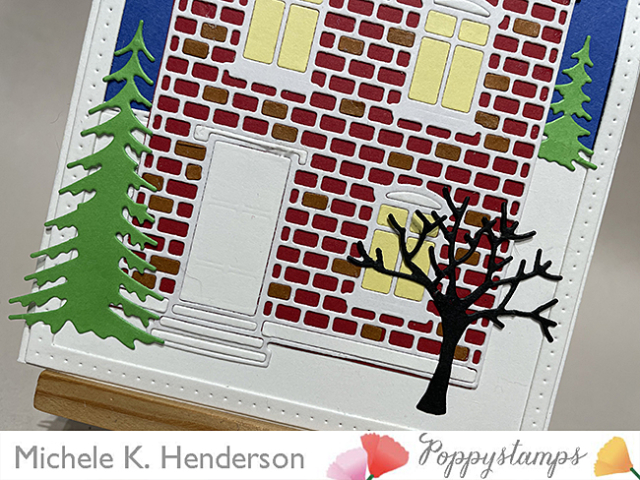 It's a chilly one out there tonight, but lucky for us, we've got a warm and cozy home from Poppystamps to snuggle up in! Tiny little bricks and trees make The Proper Brick House feel just like home. Take a look! 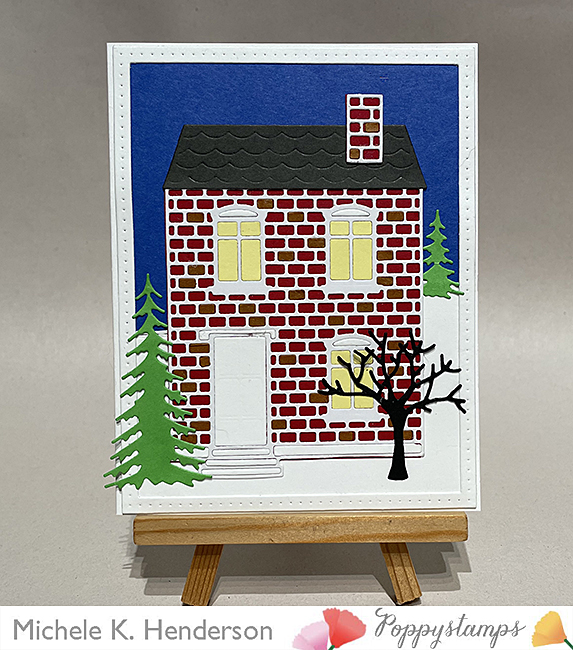 I started with a dark blue background and added a little snowy yard. Then I cut Proper Brick House out of crisp white cardstock. 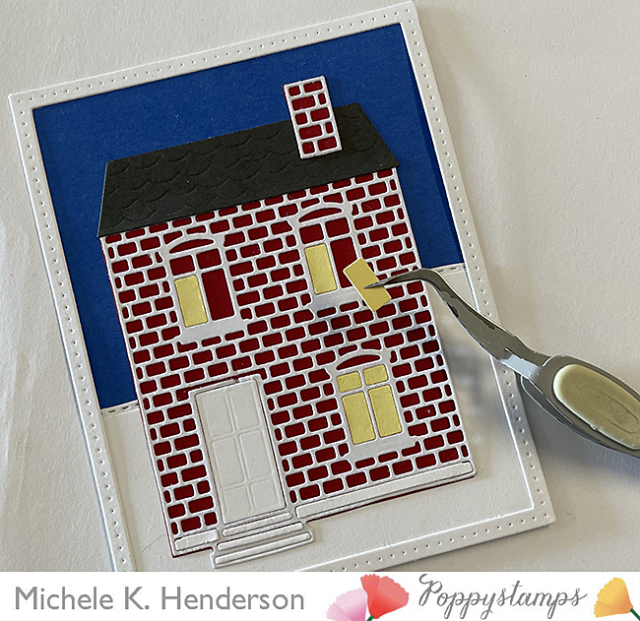 I placed a brick red panel on the back, then cut the roof out of a dark slate grey, and the window panels in yellow. I carefully glued all the tiny windows in place, and then glued the door frame, steps, and window tops in white. 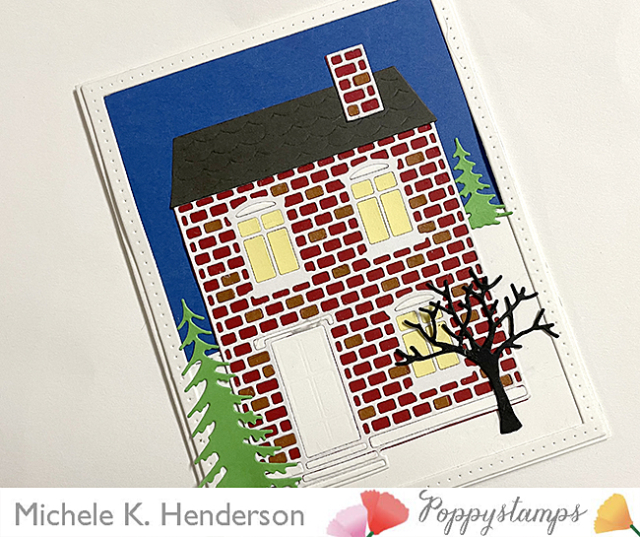 I cut green Evergreen Trio trees, and a black tree from Snowman and Trees, and glued them in the yard. Then I cut the house again in a reddish brownish piece I found in my scrap box, and carefully added a few select brown bricks here and there. It's the proper place for a cozy fire and a good book on a chilly Winter's night. 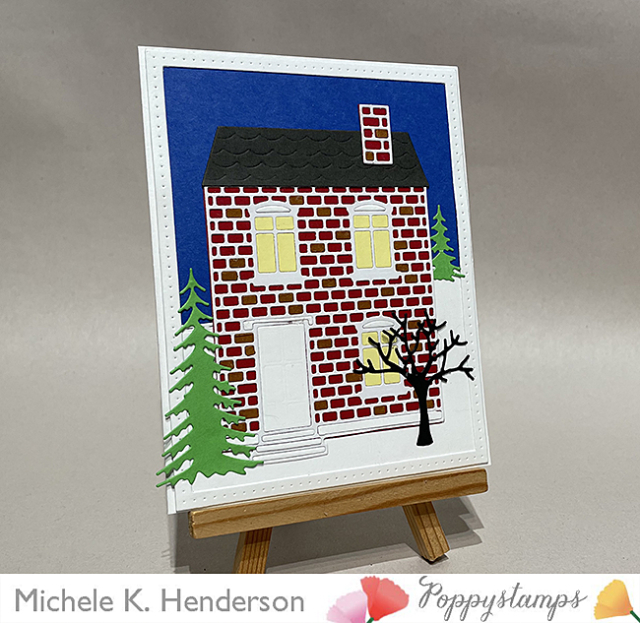 Thanks so much for joining us today! 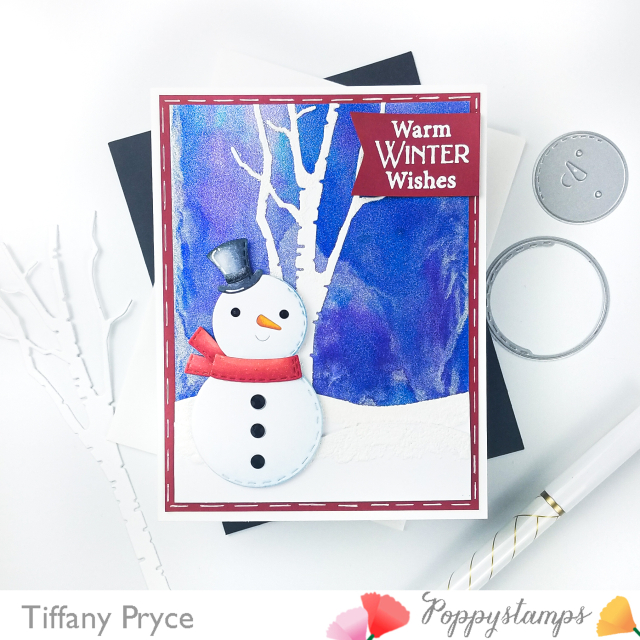 Happy New Year Poppy peeps! May your year be filled with love, new adventures, and good health! I'm sharing a card I made using the adorable Whittle Friendly Snowman and a fun alcohol ink background technique.

I recently watched a Jennifer McGuire video where she shared an alcohol ink background technique. You smoosh two panels of yupo paper together to spread the alcohol ink and create a unique blend. Instead of yupo paper, I used silver, glitter alcohol ink cardstock. On a piece of alcohol ink cardstock, I spread alcohol blending solution and several shades of blue, purple, and silver metallic alcohol inks. I carefully smooshed another piece of alcohol ink cardstock on top, pressing all over the panel to ensure coverage, then pulled the panels apart. Pulling the panels apart leaves interesting texture in the ink and is fun to experiment with. I loved that it looked like an abstract, snowy sky. Alcohol ink is so forgiving, so if you don't like your panel, add more blending solution and ink and try again! You will end up with a completely different background. It is hard to tell in the photos, but the glitter paper peeks through the alcohol ink and is so pretty. 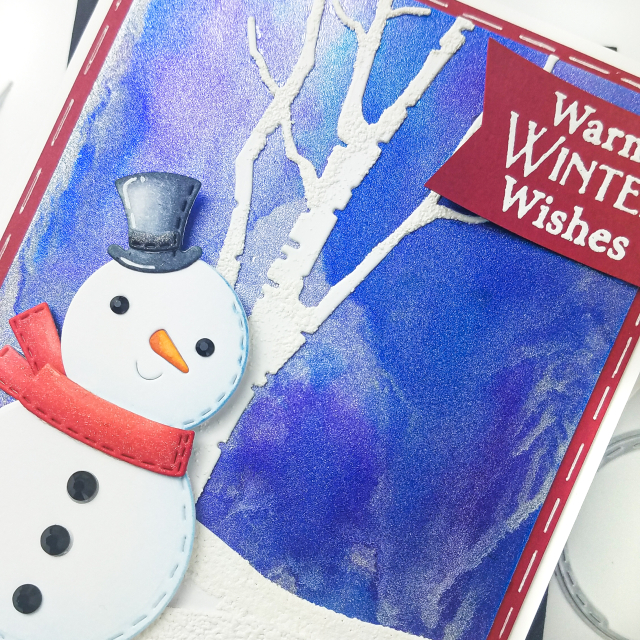 With my background complete, I worked on the other elements of the card. From white cardstock, I die cut the Birch Tree and the Whittle Friendly Snowman. I also cut snow banks by hand with scissors. On the tree and the ground, I added puffy embossing powder to mimic snow. For the snowman, I lightly blended blue ink on the edges for a little dimension and colored his nose and accessories with copic markers. I added black jewels for his eyes and buttons. I adhered the tree and snow banks to my background with liquid glue and the snowman with foam tape. For the sentiment, I white heat embossed a sentiment from the Wintertime Sentiments stamp set. I trimmed the sentiment into a banner by hand. Finally, I matted the card front with red cardstock, and I drew faux stitching around the edges with a white gel pen. Thanks for stopping by the blog today! 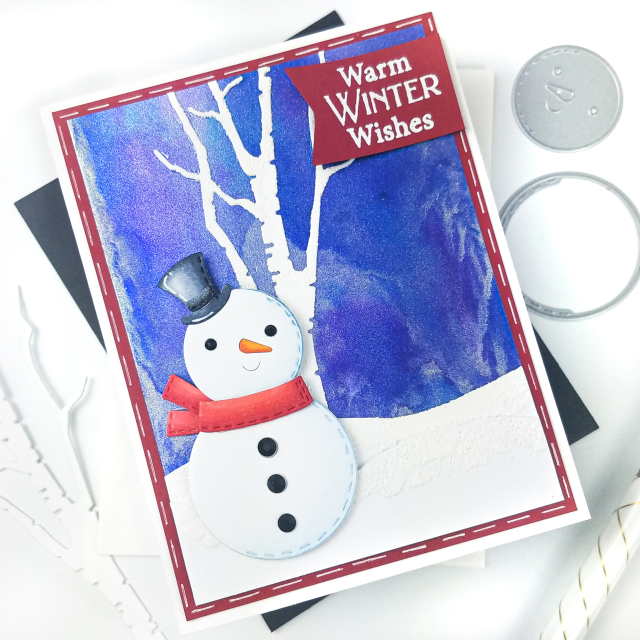 With Poppystamps we will have a happy Christmas! A pretty easel card by Patty Tanúz

With my favorite holiday season craft die, I share this beautiful easel card!!!! 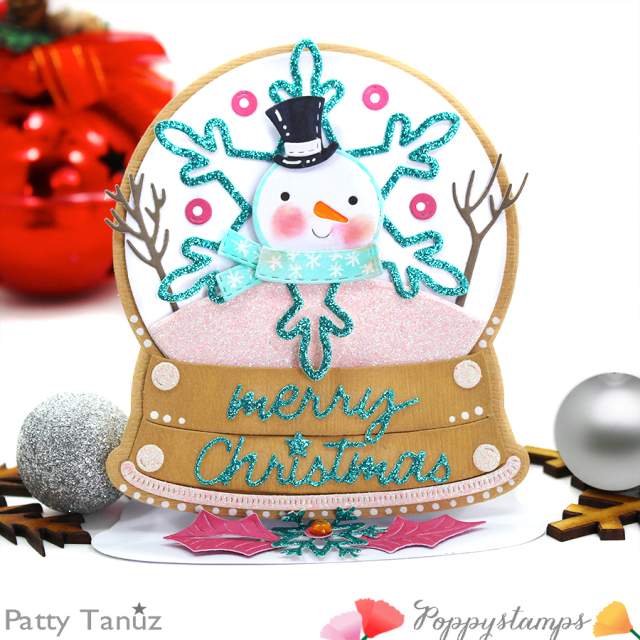 What do you thing about colors??? I like non traditional jiji mhhh mint and rose glitter is my favorite! 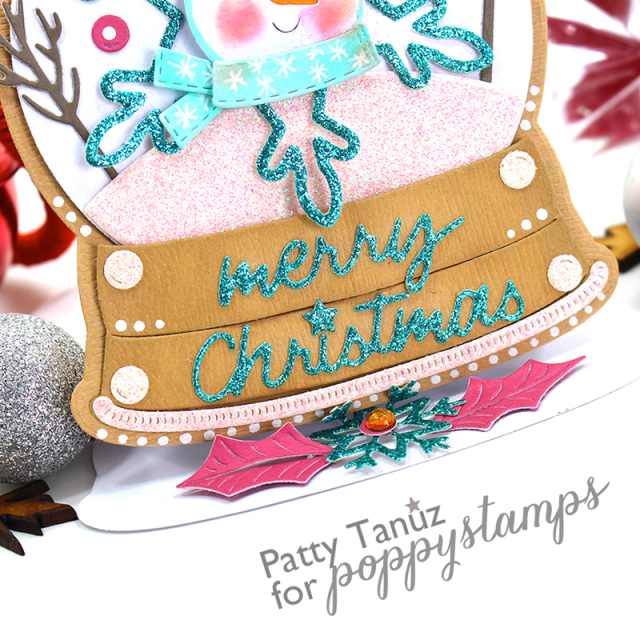 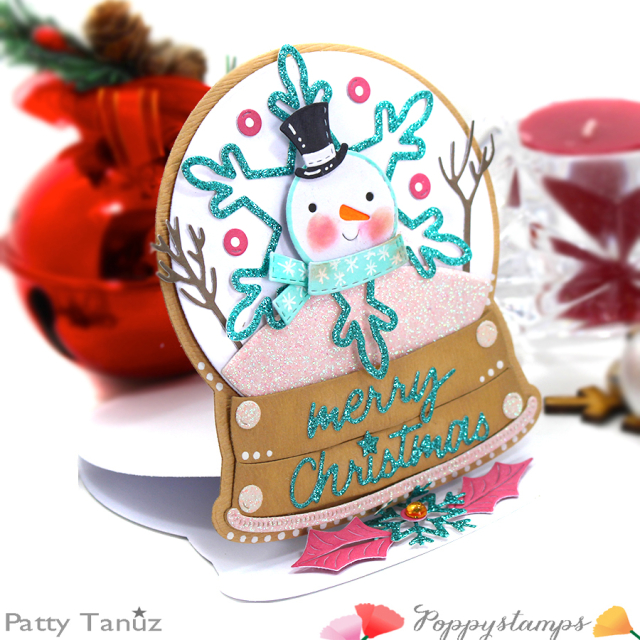 With Poppystamps we will have a happy Christmas!! 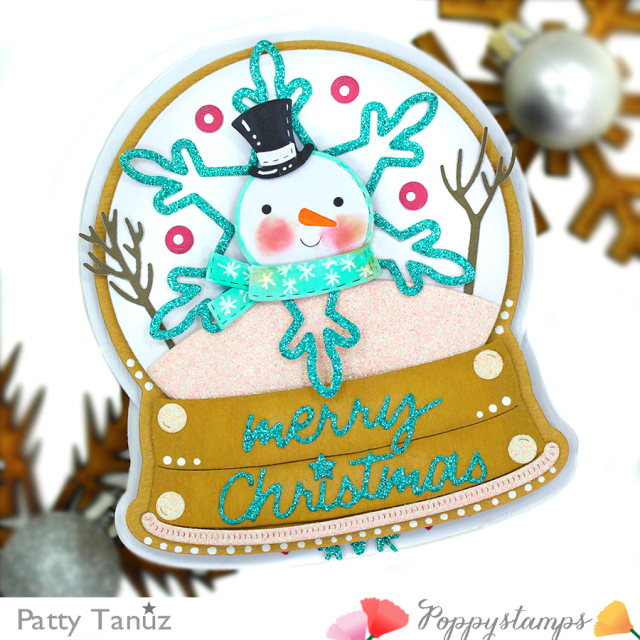 And remember, Christmas isn't a season, it's a feeling!!!! 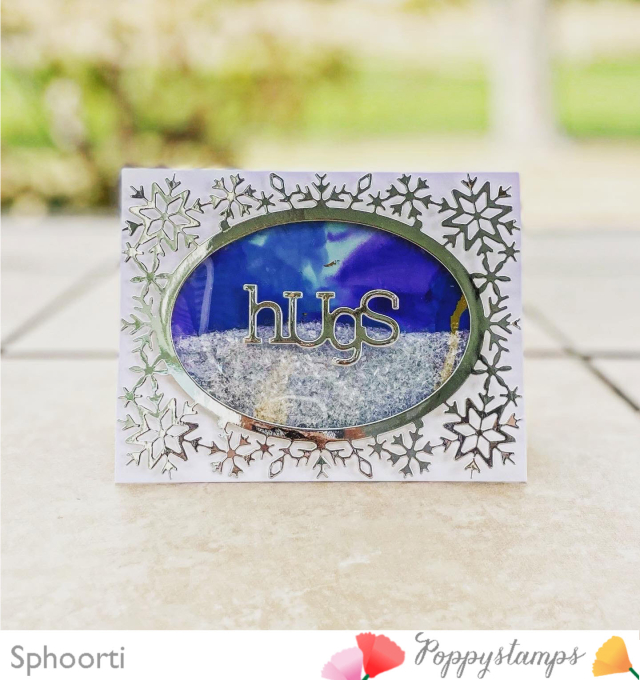 Sphoorti here with another item from the 2021 Holiday Release - the Snowflake Oval Frame die. This one was very easy to make, and I actually don't have any lessons learned this time. Can you believe it? I guess there's only so many ways you can mess up a card!

So, I'd be lying if I told you that this was the plan I had in mind when I made this card. I actually didn't plan this card at all. I had a piece of alcohol ink background from like years ago and it resurfaced when we were unpacking, and it was the perfect size for the Snowflake Oval Frame so I went with it! Cardendipity, I like to call it. I used silver foiled cardstock to cut the frame. I lined the frame with skinny foam tape, filled the shaker bits (Diamond Dust, my favorite), and put the shaker portion against the alcohol ink background and that was it, actually! I didn't cut out multiple frames and stack them on top of each other to create the well because I wanted the snowflake portions of the frame to "freely float". Then I used the Playful Hugs sentiment die and cut a bunch with white card stock, stacked them to make a chipboard like sentiment. I used the same silver foiled cardstock for the top layer, and adhered the sentiment to the middle of the frame. And that's it!

I'm posting a bunch of pictures of the card below. Acetate, Foil, Alcohol Inks... Incredibly beautiful but can be vicious when it comes to taking pictures! So, I tried different angles, filters, you name it. Feel free to pick your favorite! 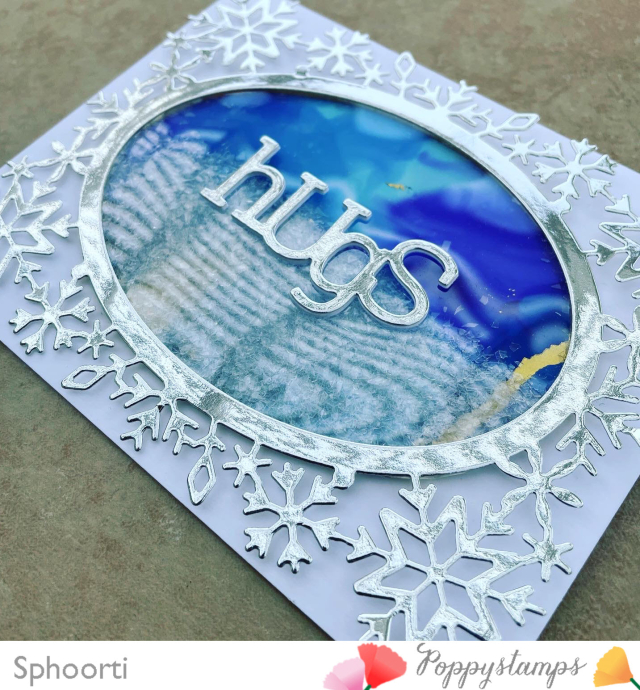 In the above picture, you can see the "floaty" effect of the oval frame. 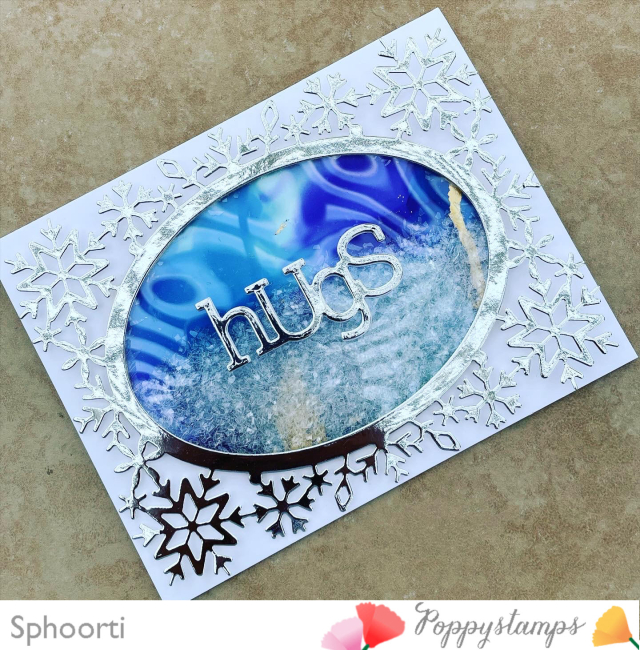 I actually tried to use some foil on the alcohol ink background. I think it was too dry by the time I tried, so it only got stuck to some portions. It's the gold stuff. Some of the shaker bits cover it, but it's a nice effect in real life. It would have been even more awesome if I found a background with silver foil that matched the rest of the card. I may be asking for too much! 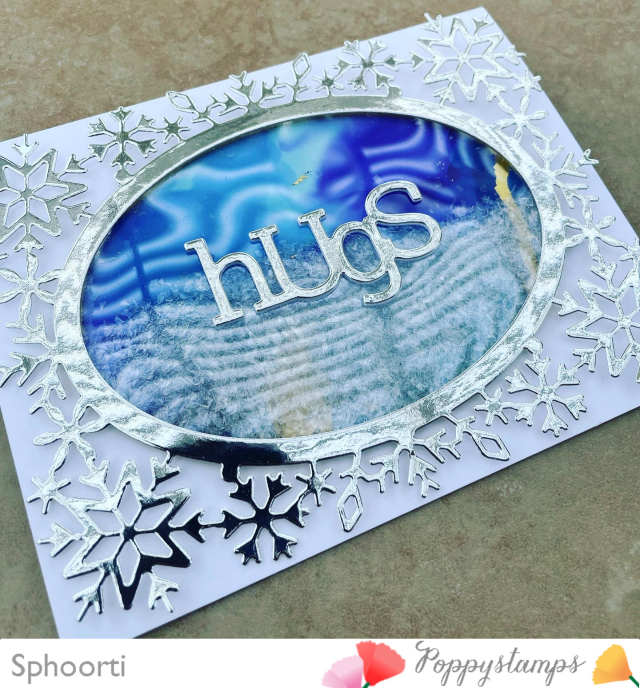 Thoughts? Questions? Epiphanies? Please do let us know! We love to hear from you!