Using the Slim Leafy Collage die as a Stencil
by Sphoorti 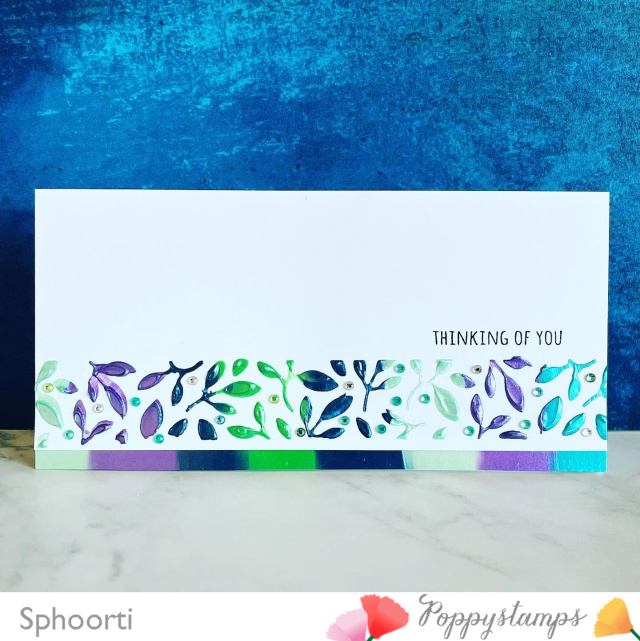 I'm back today with 2 cards! I planned just one of these, but the second one just happened to happen. I'll explain.

Let's start with the one that I actually planned, which was this: 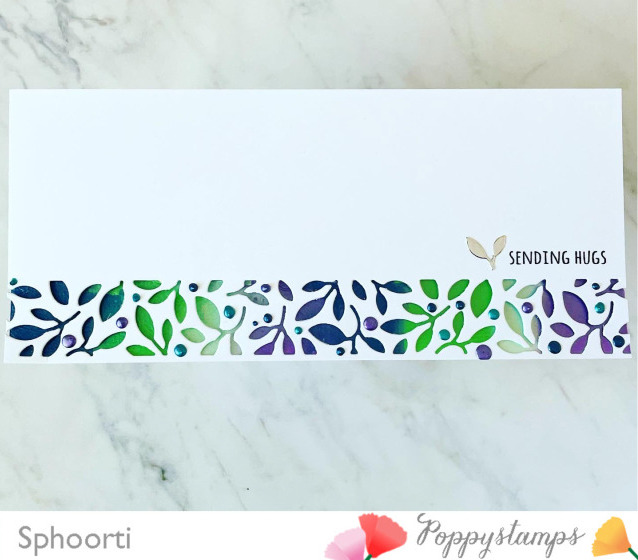 You know all the glimmer pastes / Nuvo drops / Pops of color / Stickles / Fairysugar etc. we have in our craft rooms? I saw a fellow crafter (Carly Tee Miner) use her Nuvo Jewel Drops to create a mixed media background card and thought of doing something similar with my Pops of Color. And I envisioned overlaying the Slim Leafy Collage die cut on top so the Pops of Color peek through.

So, I took a card base and squirted a bunch of the paste and took a spreader thing (not sure what they're called, but I think they're used for spreading frosting on cake or something like that - it's the transparent thing I'm holding in the picture below) to spread out the paste. We have an equivalent in the crafting industry, but I didn't use that one, because I wasn't sure if the paste would wash off. So, I used these disposable ones. Anyway, here's what I ended up with. Yummy, no? 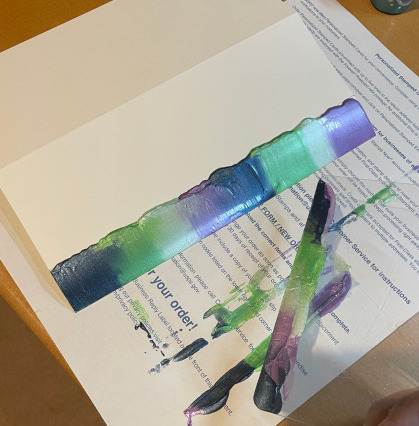 I let this dry overnight (I'd be lying if I said I didn't try touching it in between to see if it was dry yet. Let me tell ya - it wasn't, and you'll see my fingerprints if you get close enough.)

So, here's where I messed up. The cardstock I used was 110 pound Neenah Solar White. Pretty sturdy, but warps with mixed media. I should have remembered this from when I made my stained glass cards last fall. But no. So, the cardstock got warped by the time it fully dried. I wanted to flatten it out, but definitely did not have the patience to put a bunch of heavy books on it and wait for a few days. So, I decided to run it through my die cutting machine. This would have been okay IF I didn't use a metal shim and 2 card stock shims on top of the warped card base. The beautiful streaks / smooth / glossy texture from the pops of color went out the window after I ran it through the die cutting machine. See what I mean? 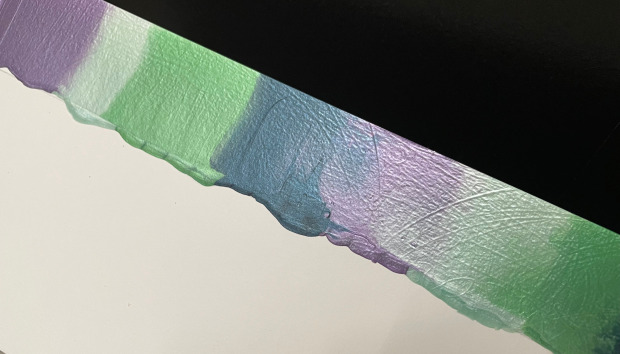 I went ahead and finished this card anyway because I didn't totally hate this look. So, I used the Slim Leafy Collage Die on a piece of card stock the same length as the card base, and foam mounted it on the card base, and stamped a sentiment from the Whittle Everyday Clear Stamp Set and the result was this: 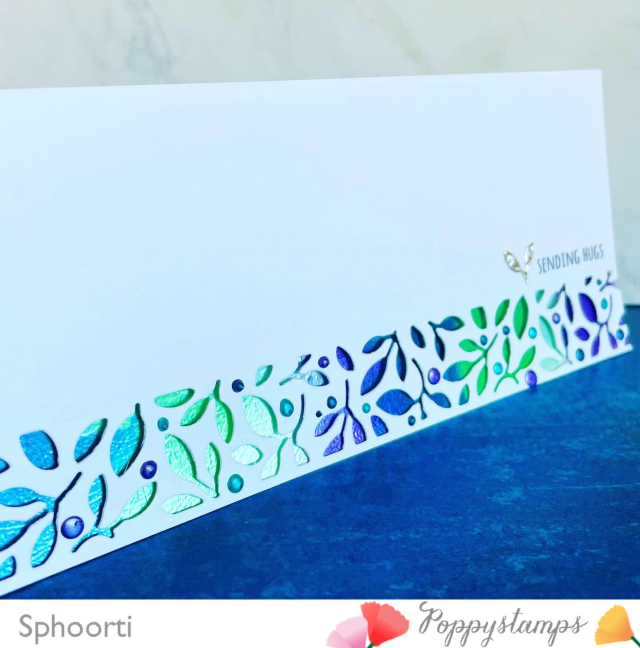 If I were to make this card again, I wouldn't foam mount it - that way we'd see more of the medium underneath. And I'd DEFINITELY not run it through a die cutting machine to flatten it. I'd use a piece of acetate as a base to spread the texture paste on instead of Neenah too! No warping! 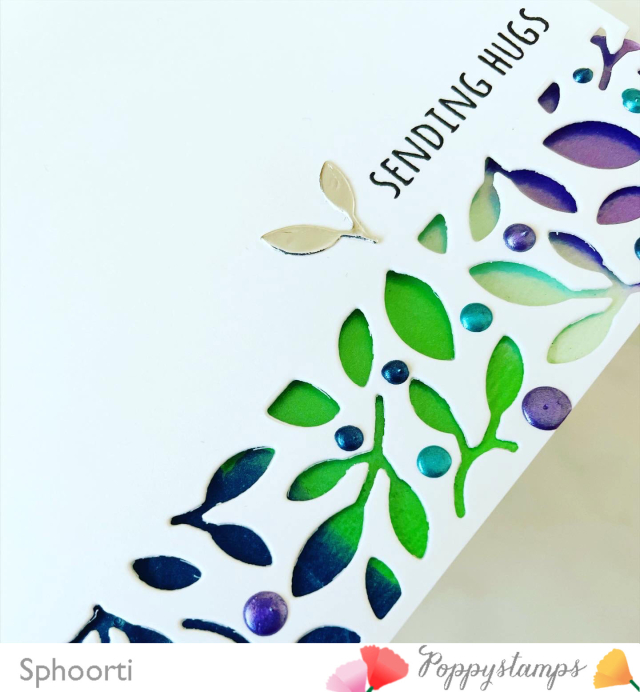 Oh, I did add some Pops of Color as dots between the leaves for a little extra something. And I'm not sure why I'm so obsessed with this foiled silver cardstock, but I had a piece lying there so I ran it through with the same die, and stuck a silver leaf spring next to the sentiment. Totally random. Just like me! 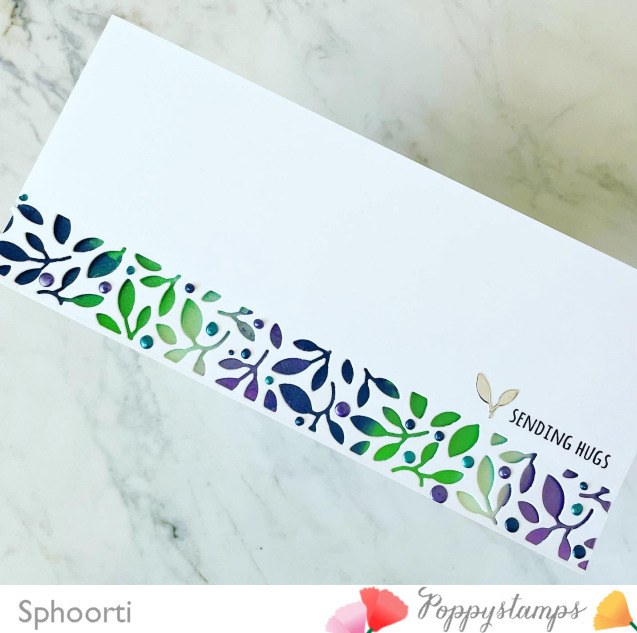 So, the second card I made kind of came to me as kind of an afterthought. I saw the die cut from the Slim Leafy Collage Die and thought - why not use it as a stencil? So, that's basically what I did. I used the die on a spare piece of cardstock, and taped it to another piece of cardstock with some washi. 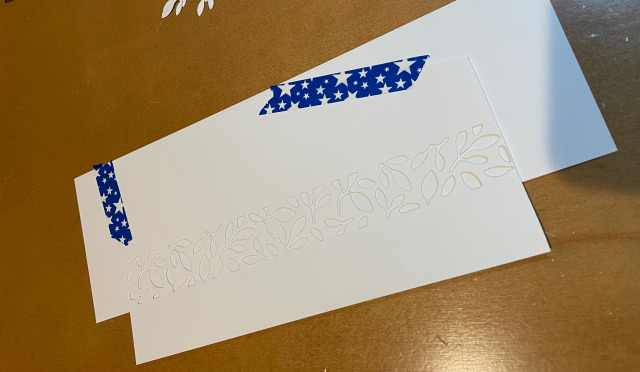 Then I squirted out some Pops of Color like so: 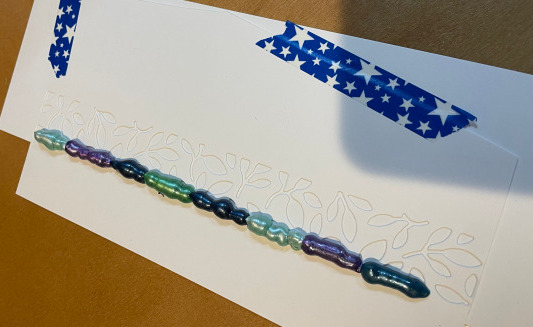 I used the spreader to spread a thick layer of the Pops of Color across the faux-stencil. I wanted the stenciled portions to really pop off the page, so I used a large amount and spread it on pretty thick. I was a bit hasty when I peeled off the stencil and ended up smudging some of the leaves, which was a bit of a bummer, but it didn't look too bad. So, I went ahead and made it a card anyway (the next day, after it fully dried, that is). 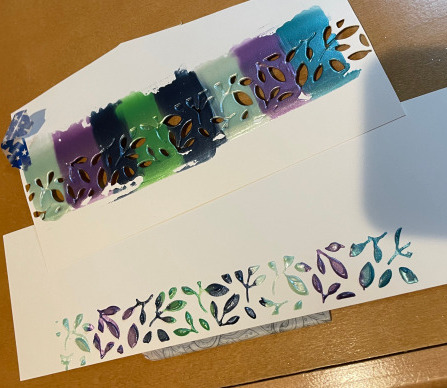 See the portion of the faux-stencil with the Pops of Color smeared above it? I liked that and didn't want it to go to waste, so I cut out a strip from it and used it at the bottom of my card. And here's the final product: 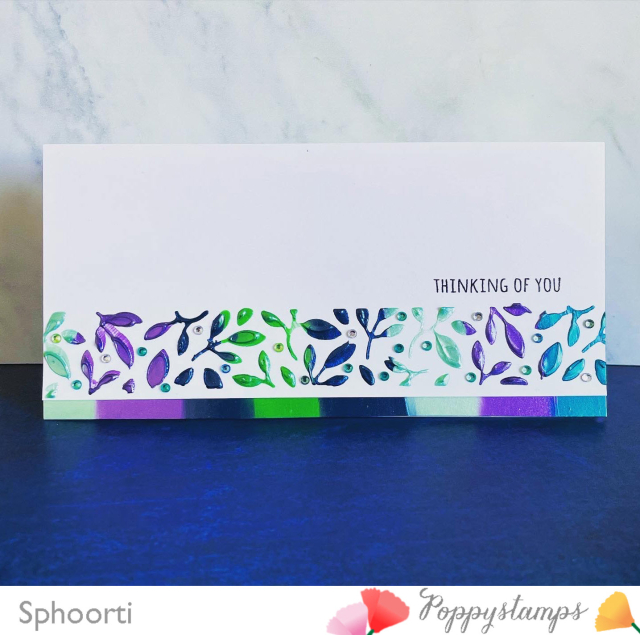 Oh, this time, I used some of the Christmas Fairy Jewels in matching colors to fill in the gaps between the leaves. Aren't they pretty?! 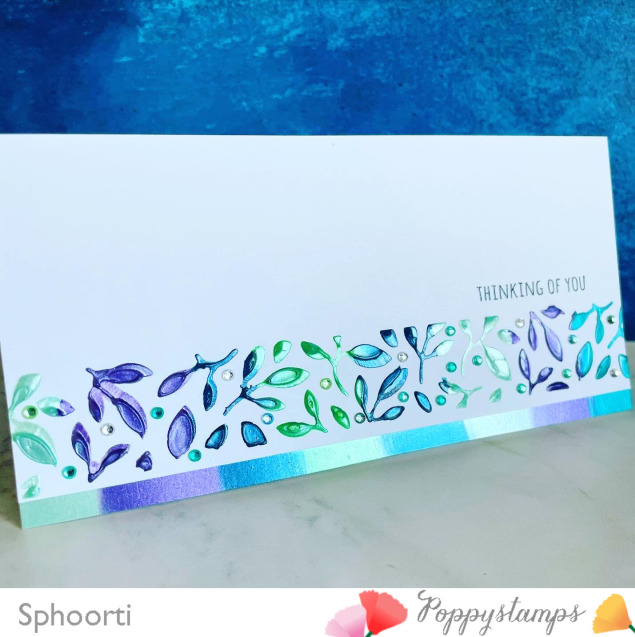 The sentiment is from the same stamp set - Whittle Everyday Sentiments. 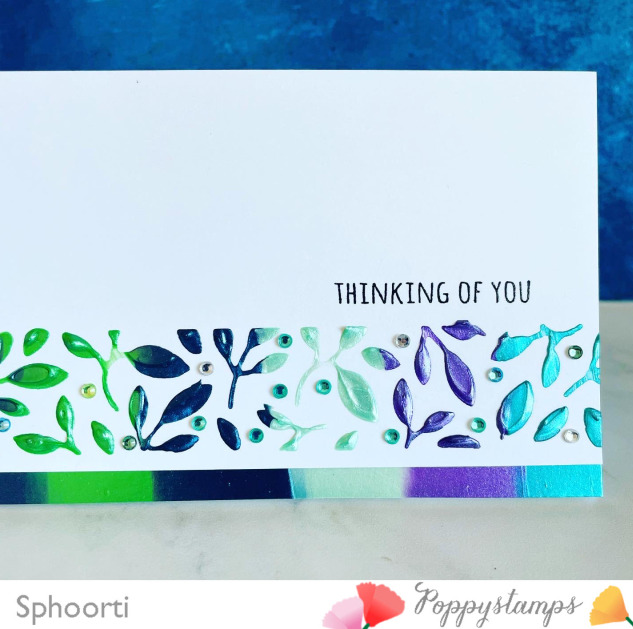 Thoughts? Questions? Epiphanies? Which of the cards do you like better? Did you like the first one after the smooth texture went away? Please do let me know! We love to hear from you.

Thank you for sticking with me through the end of the post! Hope you have a lovely weekend!

Hi Sphoorti, When I read your Blog heading, I immediately thought you meant using the border 'die-cut' as a stencil and putting your paste colours through that, as was your second card, so I was taken aback when I read how you created your first card, but the result was stunning, and your second card was equally stunning, especially as you were able to utilise a small strip of the waste paper die-cut 'stencil' on the bottom of your card. Both these cards are fabulous !! and your colours complete beautifully.
Lots of love from Patricia xx

Whew! What a process….but WOW! It was worth it! The colors are stunning! And with the border being so delicate in design…it really stands out! Stunning! Thank you for sharing your talent with all of us!