A Very Rainbowy Christmas
by Sphoorti 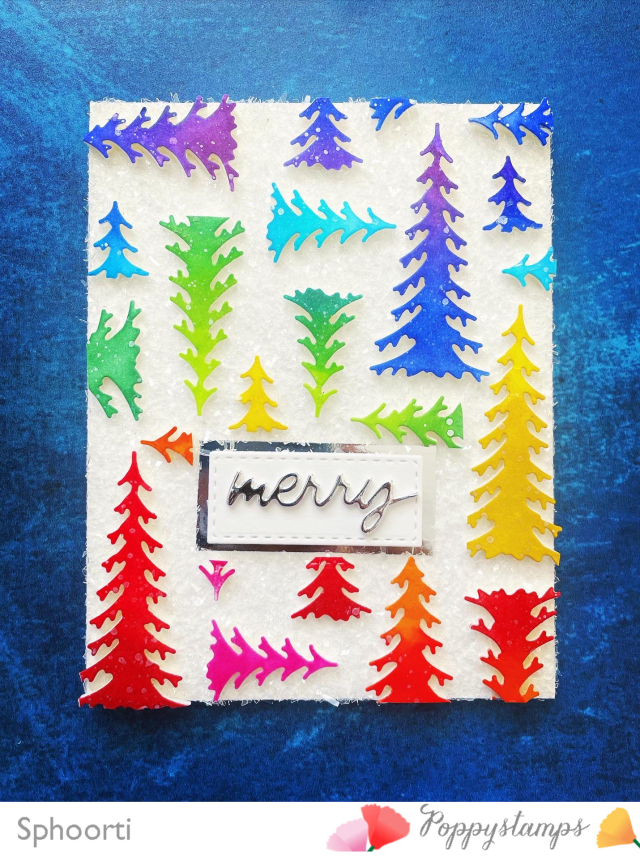 Hello Poppystars! (Is it okay if I call you that? Sounds like Pop Stars!)

Anyway, Sphoorti here with a completely non-traditional Christmas card. I saw a number of posts earlier this year where everyone was doing a rainbow style Christmas card. I didn't get a chance to try it at the time, though I really wanted to! They're just so beautiful! The other day, I was on the phone, and there were a bunch of these tree die cuts laying on my desk and I absentmindedly started to arrange them in different patterns. I ended up liked the layout so decided to make a card with it, and incorporate the rainbow theme into it! What do you think?

I used the four tree dies provided in the Cabin Snowglobe Pop Up Easel craft die set and cut out several trees. Then, I used distress inks to ink them all up. I used Fired Brick, Candied Apple, Spiced Marmalade, Mustard Seed, Picked Raspberry, Seedless Preserves, Twisted Citron, Mowed Lawn, Lucky Clover, Mermaid Lagoon, Broken China, Blueprint Sketch (my favorite!), and Wilted Violet. I used a blend of 2 - 3 colors in each family and ended up with this assortment: 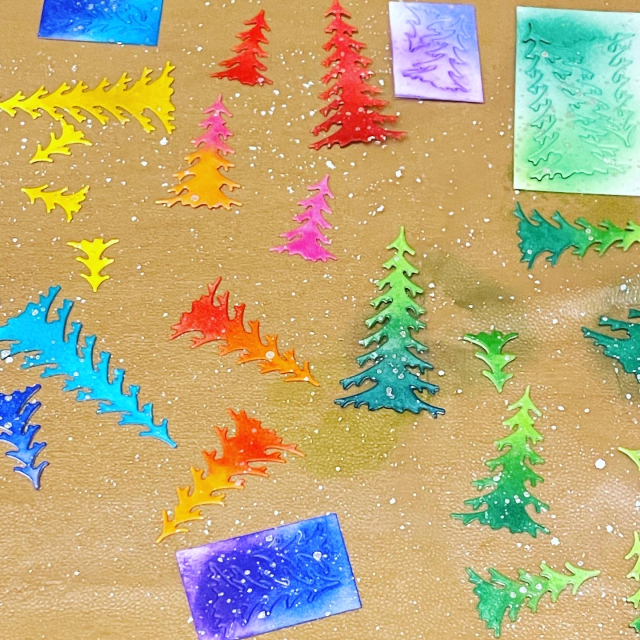 I decided to save the lighter ones (the pastelly colored ones) which I made with just some leftover inks on the blending brushes for a future project. For this one, I used all the deep / vibrant ones.

I mixed some Perfect Pearls in with some water, and used a paint brush to splatter the trees with the specks. I love that effect! 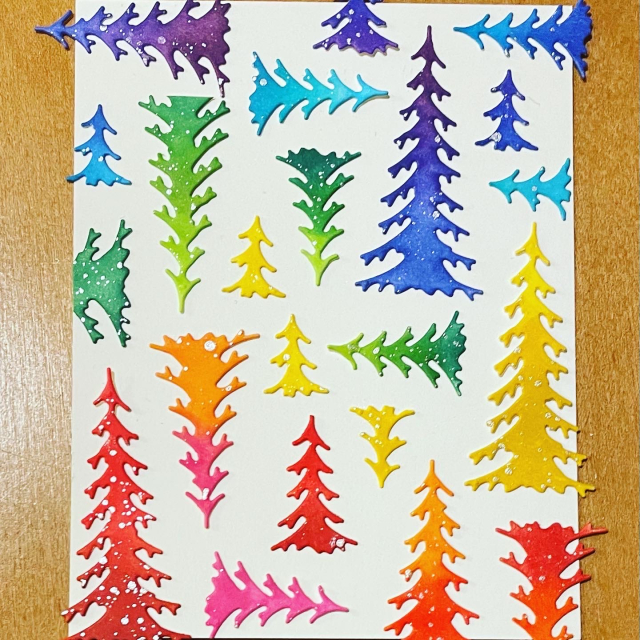 And then, the disaster happened. I couldn't find my masking paper. And my press-and-seal doesn't seem to have enough stick to it. So, I decided to use Washi Tape. And this works well, too! That is, if you remember to remove some of the adhesiveness of the washi before sticking it down to your panel. I, unfortunately, did not. So, after using Washi to pick all these up, I used a basic rectangle die to cut out a square in the middle of the panel for a place where I can put the sentiment. The strong washi + a run through my die cutting machine ensure that the Christmas trees got almost embedded into the washi and I had a heck of a time peeling all of them off. At one point I considered just making fresh trees, but I was lazy. So, I decided to just keep at it and peel off the trees without tearing them. A herculean task, but I did it! I did lose some trees in the process, but I had some from the area I cut out for the sentiment so I just repurposed it.

Anyway, after peeling off all the trees, I took a card panel (same size) and put a layer of sticky adhesive on it. I rearranged the trees by using the picture as a guide, and once I was done arranging all the trees, I took my favorite embellishment - Diamond Dust - (I swear, I can't get enough of this stuff!) and poured it all over the panel. The portions that still had adhesive that wasn't covered by the trees held onto the dust et voila!

I cut out the word "merry" from the Small Freestyle Merry Christmas die from the 2021 Holiday Release (another favorite) multiple times and stacked them up, and used silver cardstock for the top layer and put it in the sentiment area. And that was it! What do you think? I hope you liked it! I honestly love it so much, I can't help but glance at it whenever I walk by, in spite of the flaws! Here are some more pictures of it. 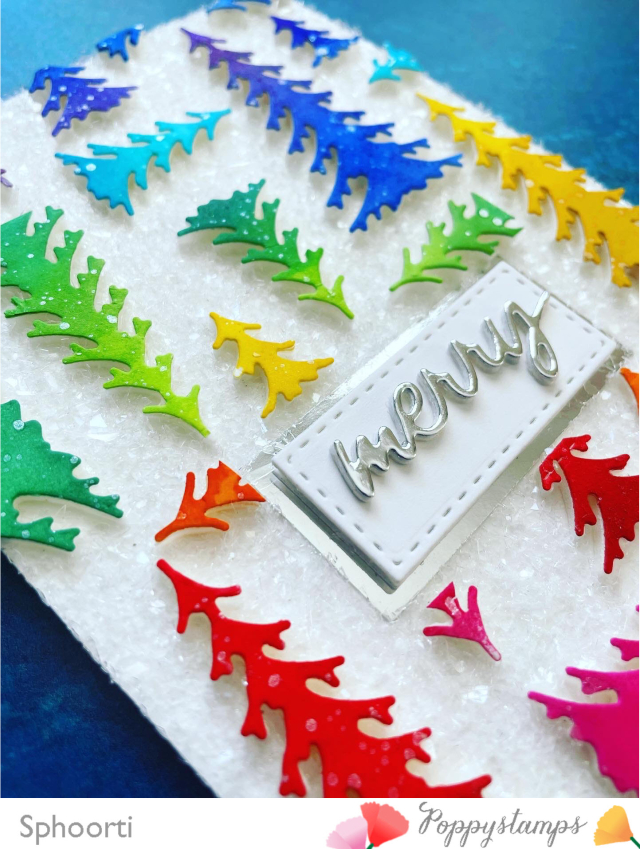 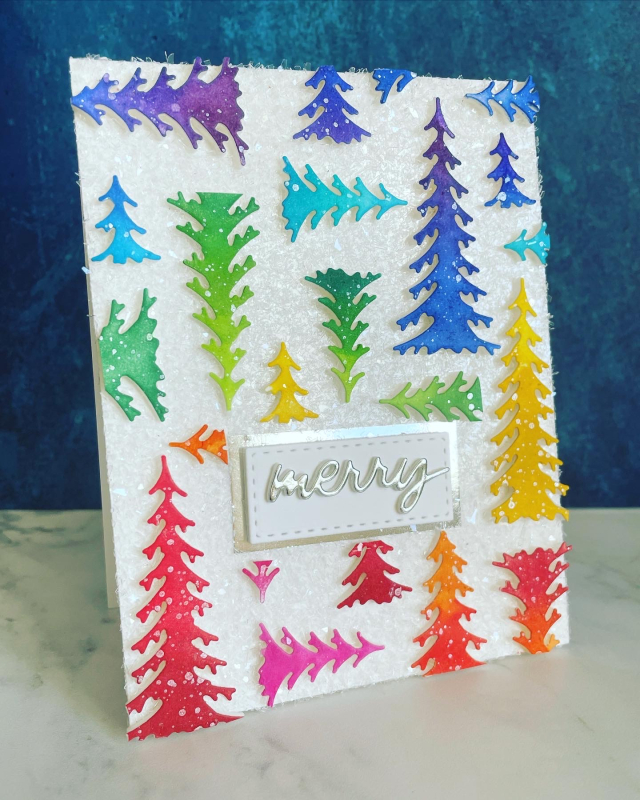 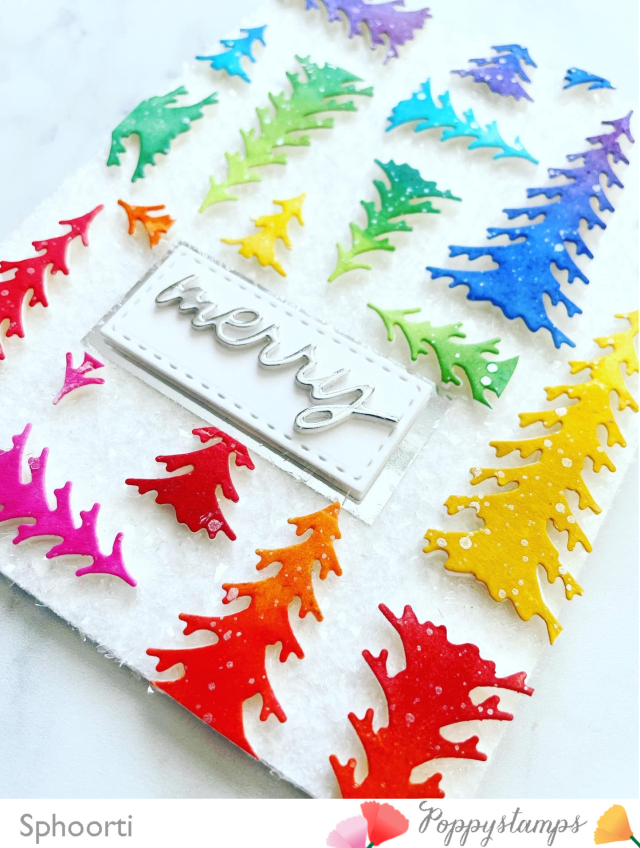 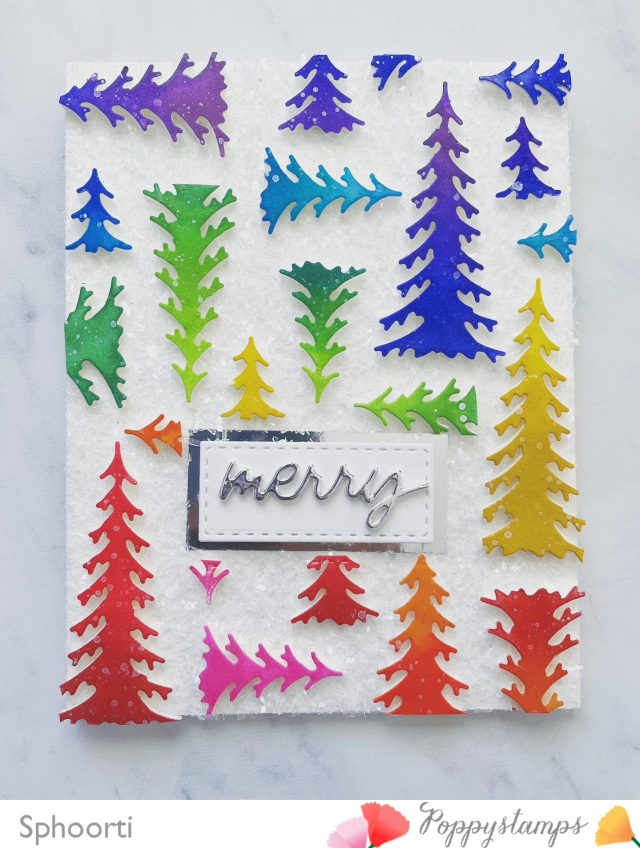 Thoughts? Questions? Epiphanies? Please do let us know in the comments below! We love to hear from you all! Have a great weekend!

Hi Sphoorti, Wow !! you have turned a disaster (your words) into an amazing card, the contemporary trees and the 'bling' look gorgeous.
Lots of love from Patricia xx

You're the sweetest, @Patricia Howarth! Thank you SO much for your kind comments. They make my day!
Sincerely,
-Sphoorti <3 :)