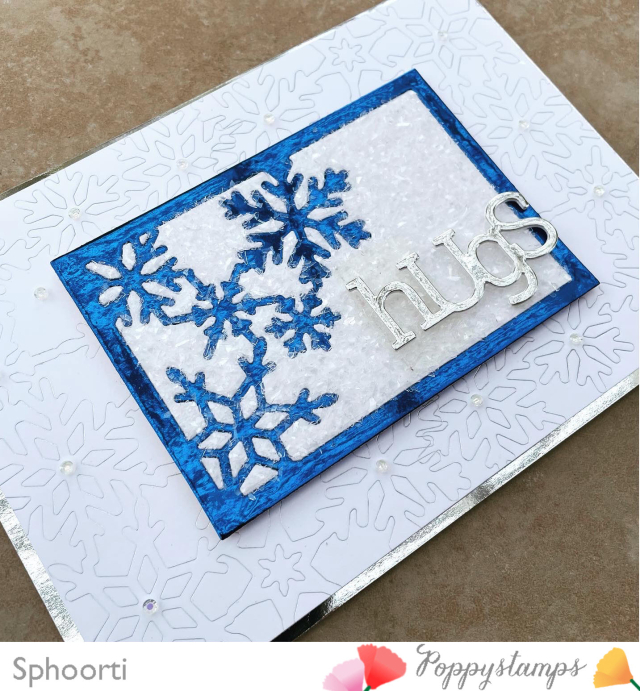 So, one of my birthday presents this year from my sweet boyfriend was a Gemini Foilpress. While I don't have a collection of hot foil plates, I saw videos on YouTube that showed how you can use Foilpress with regular dies too! And I went nuts. I foiled all the things! I may have to think about changing my Instagram handle (@StampAllTheThings)

Before I get into how I made the card, I wanted to tell y'all about some things I learned during this whole process, and think they may help you if you're in the same situation as me i.e. I had a Gemini (regular), not Junior. (Also a gift from sweet boyfriend) And I assumed that the Foilpress (which is meant for the junior machines) would work with the regular one. And while it's true that it does, we need a special adapter plate for it because otherwise, the machine doesn't detect the Foilpress plates being fed into it. So, I purchased it on Amazon (with a lot of anxiety because I read a number of reviews that said that the adapter didn't work well for them). I bought it anyway, because I figured it's cheaper than buying a whole new Gemini Junior for it. (And gosh, during this whole process, I was kicking myself because I put the Foilpress in my wishlist and my boyfriend bought it for me, and if he found out that I couldn't use it, he'd have bought me a Gemini Junior just so I could use the foil press, and I'd hate for him to spend more money on me. I mean, that money would be better spent elsewhere (like on something that starts with an "r" and ends with an "ing".) But really, I was feeling so guilty thinking that I shouldn't have made the assumption that the two would automatically work together, and done my research before putting it on the wishlist. Anyway, as a last resort, I ordered the plate in spite of the bad reviews, and I tried it and I swear, every single foiling I've done (including the first one ever) has turned out great. I followed the instructions that were in the package and it worked beautifully. I didn't experience any over or under-foiling most of the times, and the rare times when I did, I used workarounds to help so it wasn't a big deal. Also, that satisfaction each time I pulled off the foil... #priceless.

So, if you're thinking about investing in a Foilpress and you have a regular machine and not a junior, you're fine. Go for it. Black Friday sales are still going on. Consider yourself enabled! 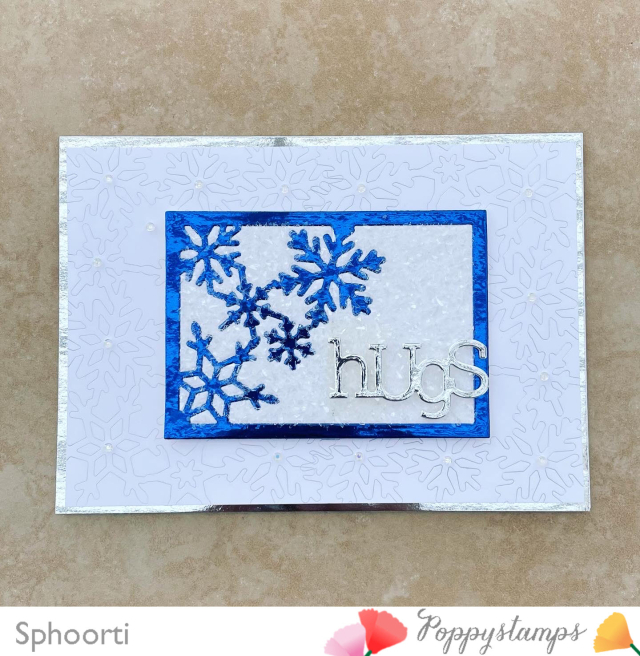 Anyway, back to the card...

The Foilpress comes with a basic set of supplies including some gold foil but for my card, I envisioned silver / blue / white / wintery tones. So, I purchased some silver foil on Amazon, and used the Snowflake Background die from the Holiday 2021 release and foiled it twice on a 5" x 7" piece of cardstock (because when I tried to make this with a regular A2 panel, the Snowflake Corner Frame covered up a lot of it, and I really wanted that foiling to show).

I cut some blue foiled paper from my scrap drawer using the Snowflake Corner Frame craft die. I did the same thing with a piece of white cardstock that had some adhesive sheets applied to the top. I stuck the foiled frame to a piece of cardstock, and then inlaid the negative pieces with adhesive into the frame. I peeled off the adhesive and sprinkled my favorite crafty embellishment (Diamond Dust) on the pieces with adhesive so that it would be covered by the icy shards / crystals. I foam mounted the panel and stuck it in the middle of the 5" x 7" panel. I die cut out the word "hugs" using the Playful Hugs craft die multiple times with white cardstock, and once with some silver metallic cardstock and stacked them on top of each other. I mounted the sentiment on the panel (it was a little hard due to the texture, but I put my cell phone + iPad + whatever I could find on my desk that was heavy on top for a few minutes until I was sure that it would hold). I used some transparent gems I had from My Glitter Fix and scattered them in the foiled snowflakes area. I used the same silver cardstock to cut out a frame so that I could make it seem like the foiled panel was matted, and that was it!

Here are some more pictures. Note: Gorgeousness of the hot foil not pictured. It's impossible to capture its beauty on camera (and not just because I suck as a photographer)! I'm gonna record a video to see if that helps, stay tuned on Instagram! 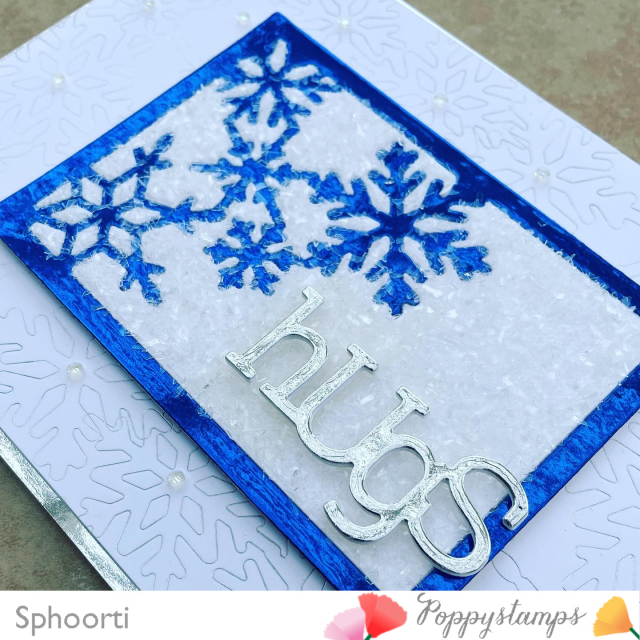 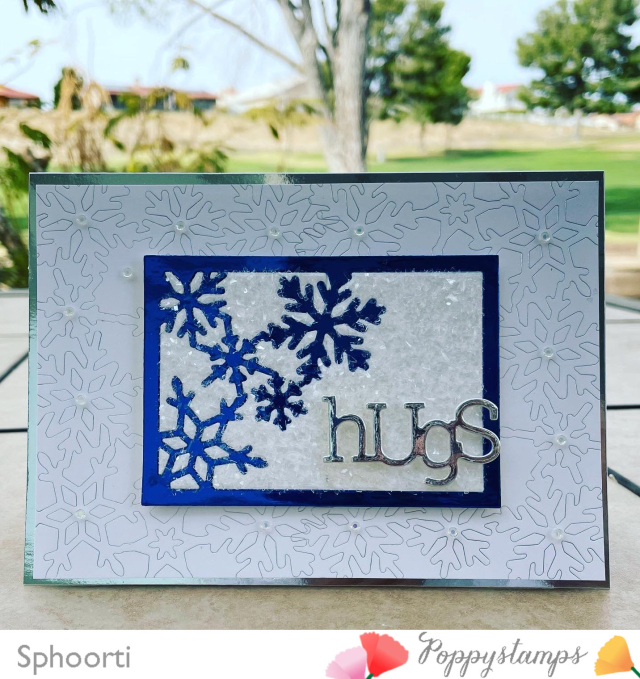 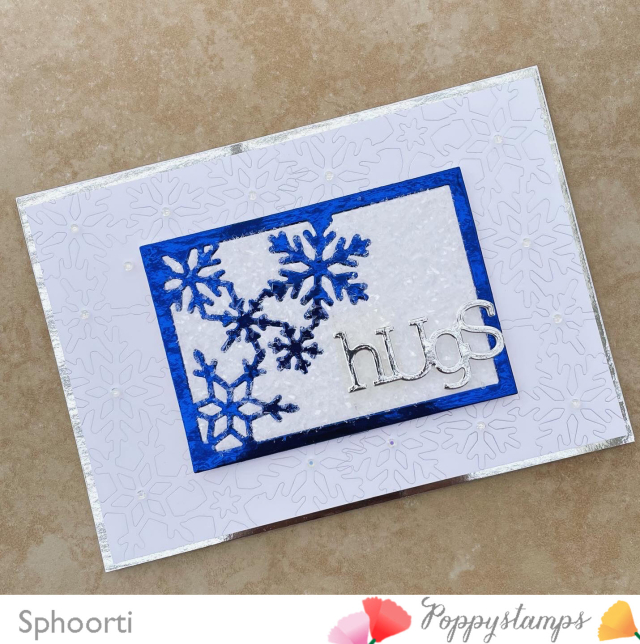 As usual, I have a few dos and don'ts.

When I first saw hot foiling machines released into the market, I thought that it was a tedious process, and that knowing me, I'd not have enough patience to wait for things to heat up etc. Plus, I was definitely not looking forward to buying a whole new set of foiling plates. One run through the foiling machine pretty much blew my concerns and theories apart. It actually doesn't feel like a lot of effort or waste of time. It's fun, and totally worth it. Plus it works with your existing dies, so no need to buy any additional goods! (Not that that's gonna stop me)

I'd love to know of your experience with hot foiling. Please do share your hot foil stories, and/or thoughts, questions, or epiphanies in the comments below!

Hi Sphoorti, Congratulations on your Birthday in September, and boy are you a lucky girlie getting the foilpress off your boyfriend, he's definately a keeper.
Your card is fantastic, I love everything about it !!
I am so thankful for all your tips and your do's and don'ts.
Thank you for your inspiration, I must admit my Foilpress is still in it's box, I haven't had the confidence to use it yet and I do have the Junior machine, but after seeing this Blog post, I will definitely be trying it now and I'm so grateful that I will be able to use all my Poppystamps dies with it too.
Take care.
Lots of love from Patricia xx