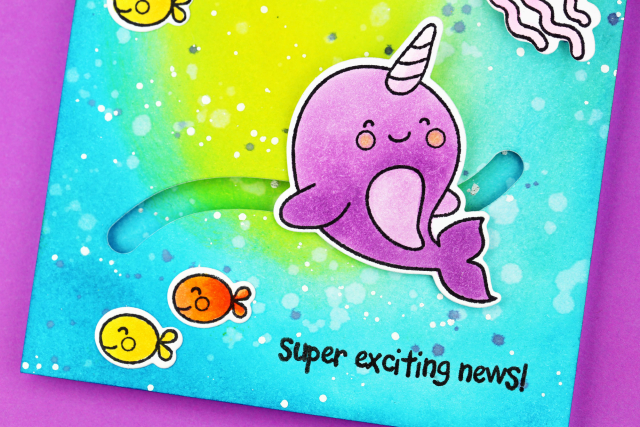 Thanks for stopping by!  I've got some SUPER EXCITING NEWS to share!  Our parent company, Memory Box, has introduced new slider dies!  We'll be showing projects made with sliders  September 2-12.   You'll see designs from each of the design team members using several different Poppystamps images.  We've got a little candy to share too -I'll tell you more at the end of this post. 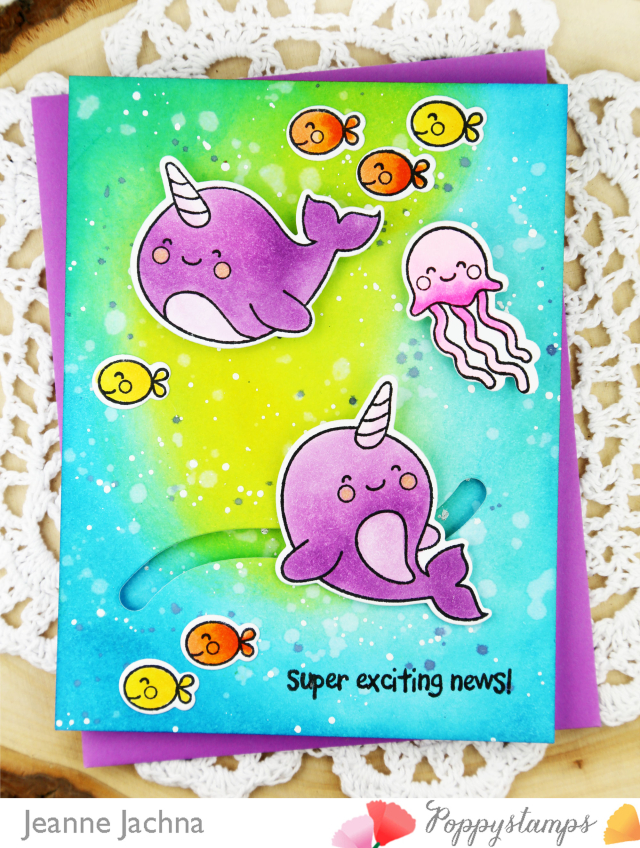 I'll be honest.. I've never made a slider card before.  I've seen tutorials where you have to do a bit of measuring and cutting with a craft knife and it all seemed a bit complicated to me.   The Memory Box slider die made this a quick and simple process.  And if I can do it so can you! 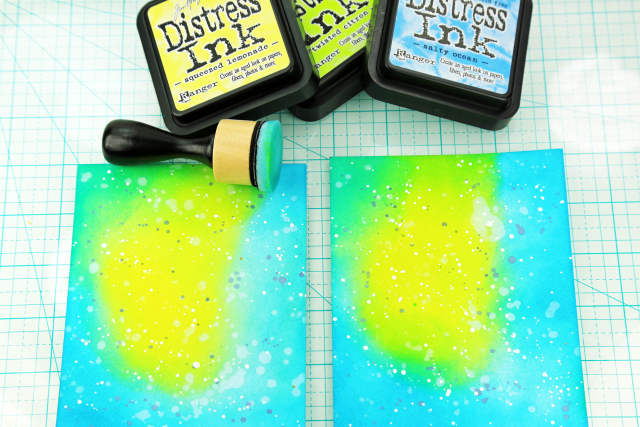 I wanted to create an underwater scene for the I'm A Narwhal images.  I was concerned about the area that would peek through the cut grove for the slider so I made two identical patterns with distress ink.  It was easier to work on two panels at the same time so I could repeat the process  one step at a time.  I inked in Tumbled Glass, Squeezed Lemonade and Twisted Citron.  I added Salty Ocean around the outer edges of the panel.  I spritzed each panel with water, and then spritzed it again with some watered down Chipped Sapphire Distress Ink.  The finishing touch was a splash of white ink. 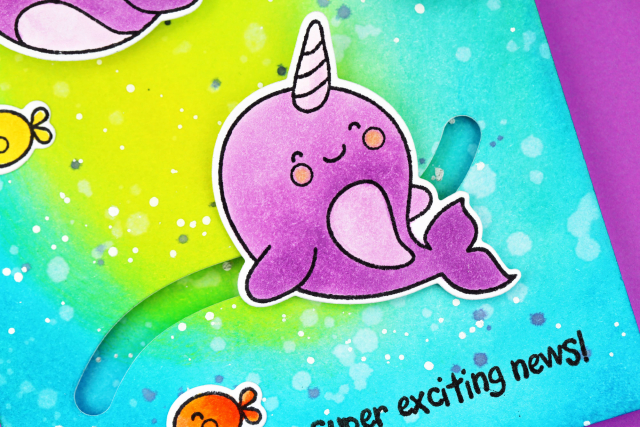 I attached one of the panels to my card base.    A little planning is important!   I laid out all the images on the second panels to decide where each image would go before I cut the slider groove.     I didn't want the sliding narwhal to cover any of the other images as it moved along the groove.    To attach the narwhal in the slider goove, I cut a small rectangle of foam adhesive tape to fit in the groove easily.  I attached a penny to the reverse side, and the narwhal die cut on the front.   Next I adhered the entire front panel to my card base with adhesive foam tape.  You need the open space between the two panels to allow the slider to move. 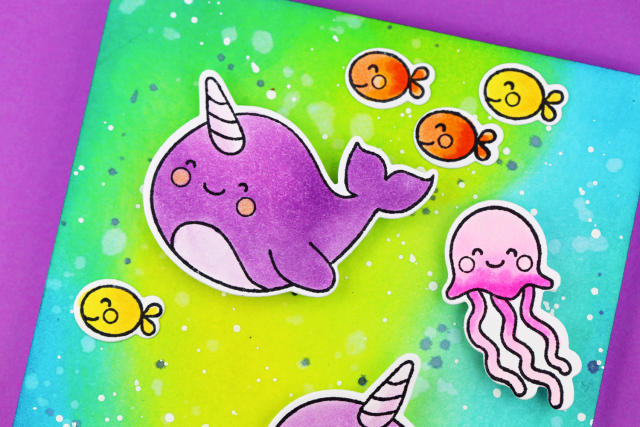 Now it's time to adhere the rest of the images in the scene.   I kept some flat (the small fish), and raised the rest with foam tape to add dimension. This  card is so fun and was so easy to make!   I know I'll be making lots more now that I've given it a try!

Do you love interactive slider cards?  Maybe you're new to this technique just like me!   As mentioned, we'll be showing you more slider projects through the 12th.  And we've got a special prize to give away!  At the end of our slider event,  we're going to randomly choose one comment that was left on any of the posts featuring sliders as a prize winner.  The more posts you comment on the better your chance of winning.   You have until 12 am US EST September 13 to leave comments on the posts.

So please leave me a comment!  That's how you can enter to win!

Hi Jeanne!
Your card is ADORABLE! I DO LOOOOOVE INTERACTIVE CARDS OF ALL KINDS!!!! Kids LOOOOOVE THEM TOO! (Even the "grown-up" ones! LOL) I LOOOOVE the background you did! AND your doing TWO of them CERTAINLY PAID OFF!!! Your card is FABULOUS!!!!!!!!!! ;)

I love slider cards ! yours are so vibrant n fun !

So cute and colourful! Haven't tried a
slider card yet!!!

Great card your description of how you put it together was right on. Going to have to try one..

Beautiful colors,fun technique and elements and an amazing prize to be had...win..win..win!!!

I've never made a slider either but you did make it seem easy. I love your purple Narwhal! Your blending made a perfect sea for him.

Fabulous background and I love the slider - so super cute - anyone would love to receive this beautiful card - and yes I would love to win - sliders are so much fun and I love me some more Poppy stamps and die - TFS - have a lovely week!

LOVE the bold, vibrant and happy colors you used here. And he's so cute! I made one slider with pennies so the image spins. But I don't have a die for that, I just used what I have & it was a little too big. Great giveaway!

Too cute Jeanne! Loving that beautiful background under the sea!!!! Nice way to start the hop off!

What a fun card - so colorful and bright ! Love the slider idea ! Interactive cards are fun to make and give !

Super cute card!!! I just got this stamp set and can't wait to try this out!! TFS

Great card! I'd love to try it, though I don't think it is as easy as you make it look!

Gorgeous card. Love the bright colours. I have made a couple of slider cards but I like that this slider die isn't straight. Adds more fun to the movement. Hugz

Hi Jeanne, This is a Wow card !! The colours are fabulous, and I love the spritzing, the narwhals are so cute as are the little fishes, and I adore the slider element. I have never made one of these slider cards, as I, too, thought they would be so fiddly to make, but you have certainly taught me that I should give it a go !!
The prizes are fab-u-lous, thank you for the chance to win.
Lots of love from Patricia xx

So sweet and adorable, Jeanne ... there's something so magical about that glow-y colouring ... so cute! Anita :)

Oh fun and love
the inking on the
background. Great
slider!
Carla from Utah

I love slider cards. This technique has come a long way from the original DIY slot-cut idea!

I love slider cards they are such fun but yes can be time consuming and fidly to make so these dies are perfect and would make it so much easier, I can see many more hitting blog land.
Your card is so bright and cheerful and fun with a capital F , thanks for sharing and the chance to win.

The slider groove dies would make it so much easier! Your car is adorable

I love the unusual color of your ocean

Adorable card with awesome colors! Love all the fun sea creatures! I have not made a slider card yet, and these Slider Grooves look like a very fun set of dies to make creating slider cards a breeze!