Morning, y'all!  It's Jinny here today, sharing a few new goodies from our latest 2017 Holiday Release.  Please forgive my photography skills, though.  White is super hard for me to photograph, but it's ever so striking in real life.  Enjoy! 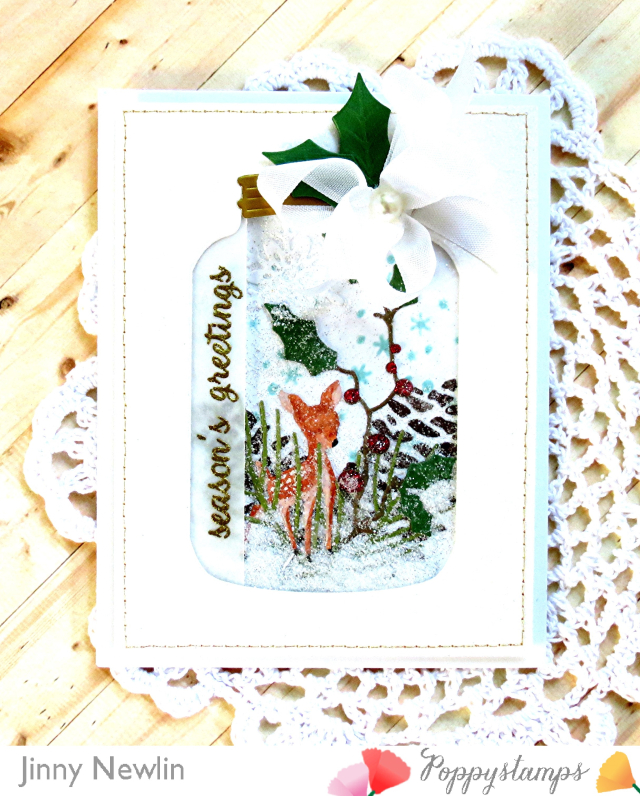 I started this card by rubbing Broken China Distress Ink, through the Winter Scattered Snowflakes designer stencil, onto the center of the white cardstock, card face.  Over the stenciling, I created the scene with die cuts, beginning with an older Ava Snowflake, die-cut from white cardstock.  The rest of the die cuts all came from this latest release.  The Double Pine Cone Collage was die-cut from Chocolate Chip cardstock.  Tip:  Use the negative die cut as a template for gluing each of those little bits into their proper places.  The Wispy Pine Needles were die-cut from Old Olive cardstock.  The Holly Twig, which you have the opportunity to win on the blog today (Woot!  Woot!), was die-cut from Soft Suede and Garden Green cardstocks; and Xmas Red Stickles was used for the berries.  Finally, the Cute Fawn was die-cut from watercolor paper and watercolored. 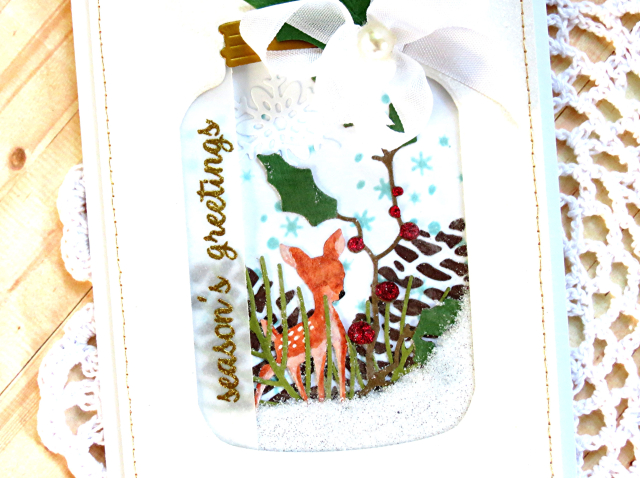 I then die-cut the largest jar, from the new Jar Collection craft dies, in the center of a piece of 4" x 5-1/4" white, glitter paper.  A strip of vellum was gold-embossed with the "season's greetings" sentiment, taken from our Christmas Greetings stamp set, and adhered along the vertical, left edge of the backside of the die-cut jar, sandwiched between the glitter paper and a sheet of clear cardstock.  The edges of the glitter paper were then framed with gold-threaded, straight, machine stitching.  Tip:  Aside from being aesthetically pleasing, machine-stitching the glitter paper and clear cardstock together also ensures that they stay put for the long haul. 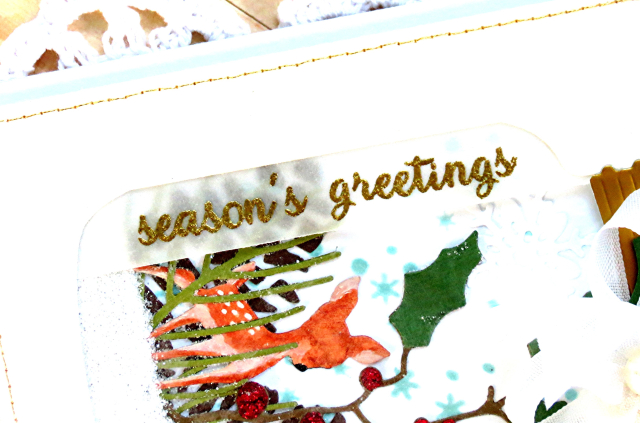 The prepped, jar panel was then popped up, with foam tape, over everything else; but before it was adhered in place, I added lots of white glitter, to the scene itself, to create a shaker effect.  Tip:  Apply a thin layer of baby powder over all the glued bits, as well as to the backside of the clear cardstock, to prevent the glitter from sticking itself in all the wrong places.  The lid was die-cut from gold cardstock; hand-cut along its bottom edge; adhered to the top of the jar; and embellished with a couple of Garden Green cardstock, Holiday Holly die cuts, as well as a double, white, seam binding ribbon bow, studded with a single, white pearl, to complete the look. 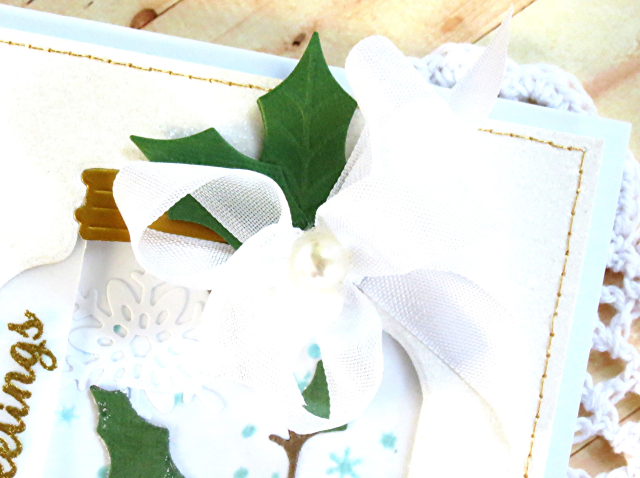 Be sure to stop back by every day through next Tuesday, August 14, 2017, to see what my talented teammies have cooked up, using all the newly-released goodies, just for your viewing pleasure.  AND don't forget to leave lots of love as you visit; because a new, Holiday Release product is being randomly given away on EACH AND EVERY Poppystamps' blog post.  You have until Thursday, August 17, 2017, to do so.  Winners will be announced, right here on the blog, the following Friday, August 18, 2017.  As I said before, I've got that fabulous Holly Twig craft die, that you see in action above, to giveaway today. 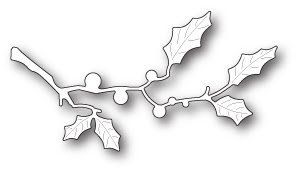 That's it, from me, for today, friends.  Actually, that's it, from me, for Poppystamps.  It's my time to move on; but before I do, I have to send out a massive thank you to Jeanne for her friendship and loyalty.  She has unwaveringly believed in me and, without a doubt, been my biggest cheerleader.  I also wanted to thank Dave for giving me the opportunity to work with his gorgeous and intricate dies.  I have been stretched creatively beyond my wildest imagination but, truly, in such a good way.  And finally, thank you to each and every one of YOU, my faithful followers.  I hope this won't be the end for us and that you'll continue to come along with me on my creative journey.  What's in store is sure to surprise you as much as it does me, but I can't wait to see what it may be!  Thanks so much for stopping by, and good luck with ALL the glorious prizes during release week!  Be blessed!

so different, more of a modern take for christmast - like it a lot

This is stunning, Jinny! I love mason jars and love that pretty fawn, too. And Christmas - my favorite holiday. Love all the pretty details you put into this.

This is lovely Jinny, such a sweet little fawn : )

Your card is adorable! I love all of the layers and that fawn is precious.

Best of luck to you in your new adventures...have so enjoyed your creativity.

I LOOOOVE ALL of the pieces/dies you've used in this little jar! What a TREAT to see it all together to create a FABULOUS SCENE! ;) White IS hard to photograph! BUT, you did GREAT with it, Jinny! ;)

Your card is great! So many things to look at, hard to take it all in at first glance. Best wishes in your new journey!

What a cute idea to make this adorable scene inside the jar. The little deer is so sweet and the holly twig looks pretty tucked inside.

What an incredible winter scene inside that jar...simply breathtaking.

This is absolutely adorable! I love it!

A terrific card with a sweet baby fawn. The Holly Twig is perfect in your design. Thanks for sharing your Poppy Stamps designs, the inspiration and the great tips. Best Wishes on your next creative journey. You will be missed here.

You really outdid yourself on this one! It is so intricate. Best of luck in your future projects.

Amazing card! Looks so complex but you have explained the steps beautifully!

Absolutely amazing card design, love the jar window and your collage elements; such balance and beauty! Thank you for sharing your talent and I wish you all the best in the future!

The little scene is great. I'd like to create the same...

Oh, the deer is adorable! I like how you made a sort of snow globe.

Lovely card and clever idea to put your woodland scene in the mason jar.

So divine!!! the jar with snow is so magic♥