Afternoon, y'all!  It's Jinny here again, sharing a card that's dressed for the Christmas season, for day three of our September Blog Blitz. 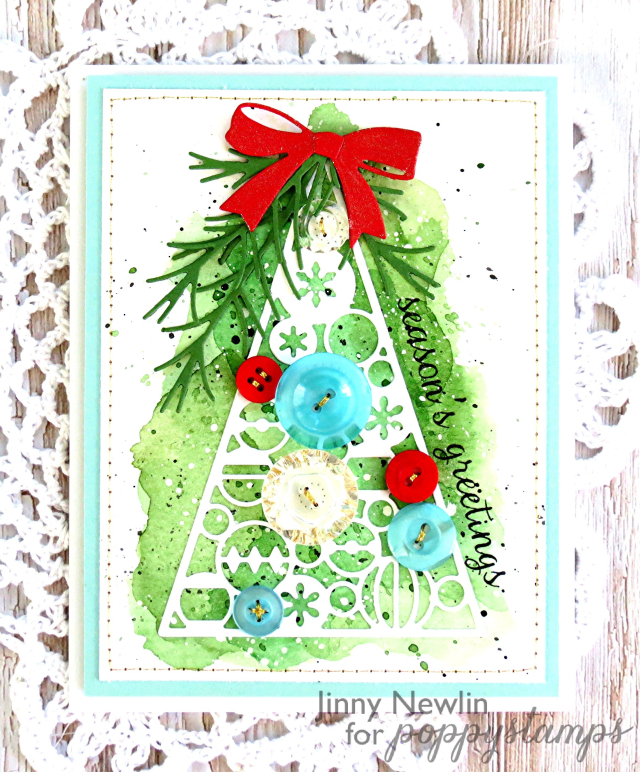 I started this card by watercoloring the space behind where the Ornament Tree die cut would eventually lie on a piece of watercolor paper.  I then splattered it with those same shades of green watercolor, as well as Pure Black and Titanium White acrylic paints, before framing it with both Lake House cardstock and gold-threaded, straight, machine stitching.  The tree itself was die-cut from white cardstock, and the "season's greetings" sentiment was stamped, in Jet Black ink, along its right edge. 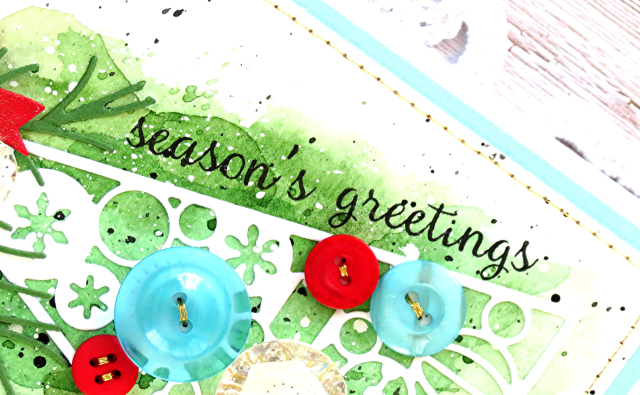 A number of turquoise, red, and crystal buttons were sewn, using gold thread, into the nearly-solid white spaces on the tree; before it was popped off the surface, of the white, cardstock, card face, with foam tape. 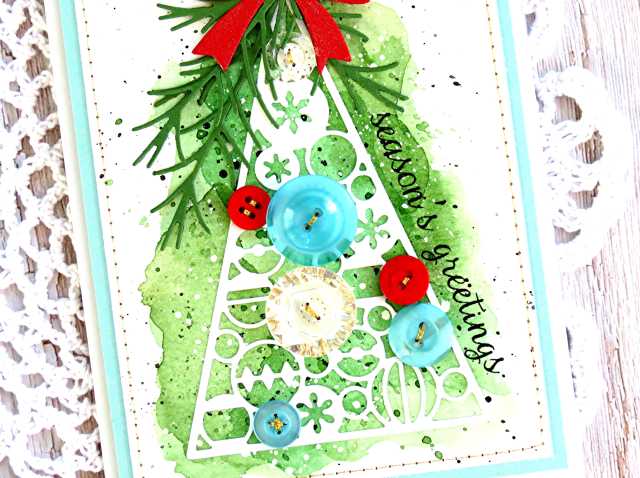 Die-cut, Garden Green, cardstock  Pine Twigs, as well as a Real Red, cardstock Lovely Bow, which was coated in a healthy dose of Clear Wink of Stella, complete the look. 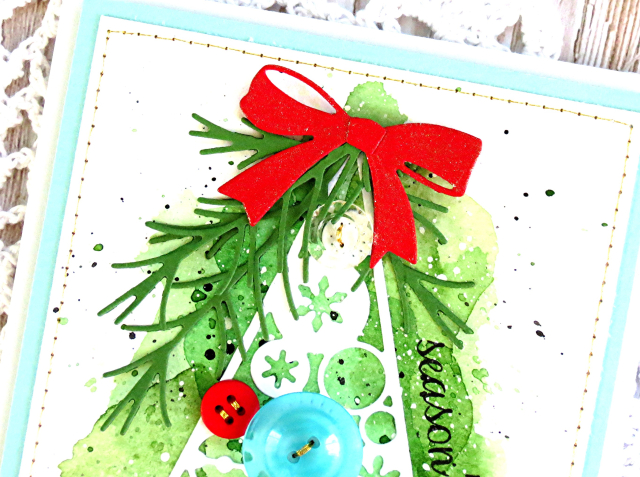 Be sure to check out all the Design Team's fabulous creations, showcasing goodies from the September Release, right here on the Poppystamps blog, every day through Tuesday, October 3, 2016.  And don't forget to leave lots of love as you visit, because a new, September Release product is being randomly given away on EACH AND EVERY Poppystamps' blog post.  You have until Friday, October 7, 2016, at 12 am EST, to do so.  Winners will be announced, on the Poppystamps blog, the following Monday, October 10, 2016.  I've got the stunning, Ornament Tree die, that you see in action above, to giveaway this afternoon. 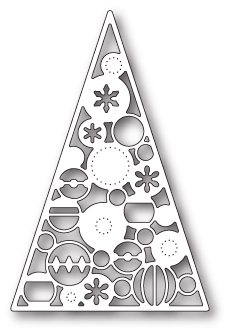 That's it, from me, for this Blog Blitz; but there truly is so much left to see.  You simply don't want to miss out.  Have fun, and good luck with ALL the glorious prizes, Poppystamps friends!  Hugs!

This is Stunning Jinny! WOW!

I love how you watercolored the background! This card is so festive and cheerful!

Beautiful card. Love the idea of the buttons. So festive and colorful.

This die is gorgeous
as is the card!
Beautiful coloring.
Carla from Utah

Beautiful card, love the background and the addition of the buttons and the red bow just makes it all 'pop'!!

Fantastic card! I love unique dies like this and I especially love all the detail in the tree!

Oh, this is interesting and the buttons are a nice little touch!

Gorgeous card with fabulous details! Love the Ornament Tree and your pretty background! Great details with the Pine Twig and Lovely Gift Bow dies, and awesome touch to add the fun buttons too!

That die is very cute. Love the card you created with it.

What a lovely Christmas card! I love the quiet happiness of it.

Love how your watercolor and the tree die work so well together.

Really like the uniqueness of this card. Very modern, very festive.

What a beautiful card with this die. I love the buttons!

Jinny, this is so beautiful. What a lovely die.

The ornament tree die looks amazing and love the way you dressed it up with the lovely cute buttons.Once again this year's Christmas Collection is simply amazing....adding each die to my wish list!!

You've created a gorgeous card with this lovely die!

This is just amazing and such a creative design. I really like the water colored background and the buttons!

Fantastic card. The pops of red and turquoise really add the wow factor.

Wow, what a fun card and die. Always looking for ways to use buttons. Fab card. Hugz

I absolutely love this tree! Your card is fabulous

Love the background with the bow!

SUPER CUTE and CHEERY card Jinny!!!
LOVE the ornament tree, ADORE your inky background too, together with they angled sentiment they make a wonderful design!!!
THANK YOU for sharing :)