February teases us with some Springlike weather and some cold reminders that Winter is still with us.  So, while large portions of the U.S. are experiencing Winter, I will tease you with a glimpse of Spring. 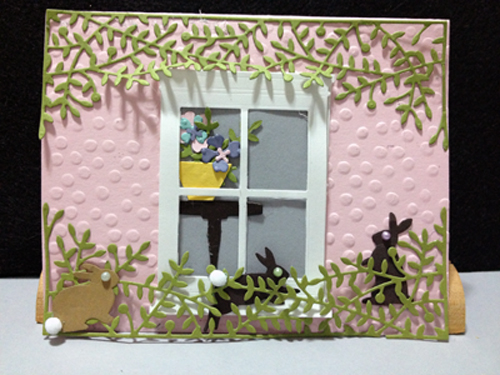 This card could serve as an Easter card, friendship card, Happy Spring card, housewarming card or any general occasion card.

For this card I have the fold along the top.  I also have the card standing open to highlight the 3-D type of effect. I purposely tucked the window behind some greenery at the top.

I added dimension to the bottom of the card so I could tuck the bunnies into the greenery.  To do this I used the leafy sprig border.  I then ran the small leafy sprig die a couple of times to create the cuttings that I placed in the bowl on the table.   The flowers were cut with the small hydrangea die cut.

The bowl for the flowers and greenery is actually the shade from the Small Verano Lamp.  I love that die as the base or the shade can act as a vessel for flowers and the shade [See my Chalet Window posting in January 2014] can be a hanging lamp too!

I placed the window die cut in white on top of a rectangle I cut to be the "paint" for the wall.  In order to give a little depth I adhered the window with foam squares cut in half in order to keep them from poking out.

Finally I added a littled rolled up cotton for the tails and a half pearlized embellishement for the bunny eyes and tucked the bunnies into the greenery.

Have a wonderful Friday and thanks for stopping by the Poppystamps blog!

Your window scene sure has a great spring feel to it Kimberly!